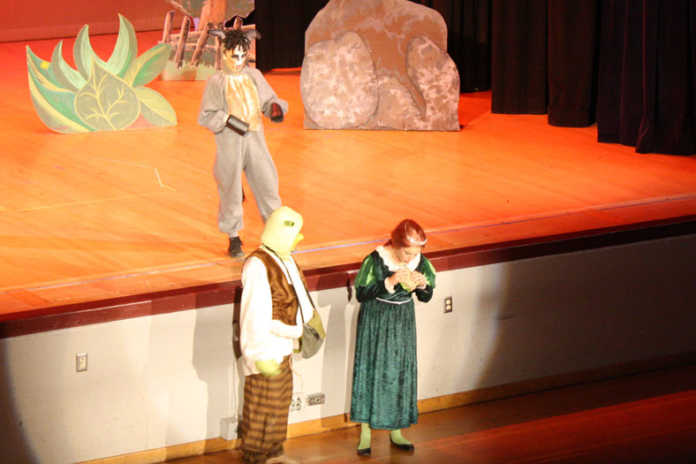 KING CITY — Shrek, Donkey, Fiona and an entire cast of fairytale characters took over the Robert Stanton Theater over the weekend for the Sol Treasures Children’s Theatre production of “Shrek Jr.”

“Shrek Jr.” tells the story of an ogre named Shrek (portrayed by Owen Larsen), whose swamp is taken over by homeless fairytale characters. Shrek approaches Lord Farquaad (played by Charles Steiber) to help, but Farquaad has his own agenda, needing a princess to marry so he can be king. Farquaad, however, doesn’t want to do the heavy lifting, so he enlists Shrek to help him rescue Princess Fiona (played by Brenna Owens) from the dragon guarding her.

“I got into character by acting stuck up and sort of like what a rich kid was,” Steiber said.

Steiber’s brother, Christian, was also in “Shrek Jr.”, taking on the part of Jack and the beanstalk, who also served as storyteller for the musical. Christian was able to get into the role of his character by visualizing the stage and imagining there was no audience. This is the third play for Charles and the second play for Christian, who were previously in “Mulan Jr.”

Larsen and Avery Girard, who played Shrek’s sidekick Donkey, were able to watch the movie and video of the Broadway play for “Shrek,” which aided them in preparing for their roles. This is the seventh production that Larsen and Gerard have been a part of with Sol Treasures.

They became involved in theater due to their families’ involvement. Larsen’s mother, Kaatia, asked him if he wanted to audition for a play and he said “sure.” Girard was influenced to join theater after seeing her father and then her sister, Marina, who has a love for acting, and Avery wanted to follow in her footsteps.

“The cast is the best cast I’ve ever had in any of the plays I’ve seen or done or been a part of,” Avery said.

“Dragon is supposed to be really big and fierce, so I tried to think of dance moves and a bunch of facial expressions,” said Bella Apodaca, who plays the dragon.

This is the 12th production for Apodaca, 15, who has been part of Sol Treasures productions since she was 8.

The production was the work of 43 students and another 40 behind the scenes handling the lights, costumes, making programs and props and working on everything that needed to make “Shrek Jr.” happen.