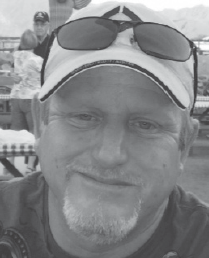 Grady Lafferty passed away peacefully at his home in Mesa, Ariz., on July 5, 2019.

Grady was born in Monterey, Calif., on July 18, 1968 to Jim and Laurie Lafferty. His formative years were spent on the 15,000 acre ranch, about 15 miles northeast of King City. Calif., where his father worked as the foreman.

Grady, along with his siblings Randy and Tammy, had no neighboring children to play with, so they spent their days outside exploring together. Being the baby of the family, Grady was often used as the “test pilot” for failed experiments devised by his older siblings (think a less sophisticated roadrunner and coyote).

Grady was a member of South County 4H where he raised and showed swine. Grady attended Bitterwater Tully School and San Lorenzo Elementary before moving to Arizona in 1983. Grady later returned to King City and graduated with the class of 1986 from KCHS where he was a member of the Mustangs football team.

In 1987 Grady followed in the footsteps of his dad Jim and Uncle Jack and enlisted in the U.S. Navy as a hospital corpsman. During his time in the Navy Grady was stationed at the Marine Corps Logistics Base in Barstow, Calif., and Naval Hospital Oakland; and was awarded the National Defense Service Medal, the Meritorious Unit Commendation and the Good Conduct Medal. During this time in his life Grady also started a family and began raising his two children, Yvonne and Austin. He was honorably discharged in 1992.

In 1998 Grady met the love of his life, Miranda; although their marriage would be challenged with many obstacles due to her chronic health issues, his love and commitment to her was evident to all who knew him. Grady used his guitar, as a conduit for both his joy and sadness. Music and art were some of his life passions.

Memorial to be held at a future date.