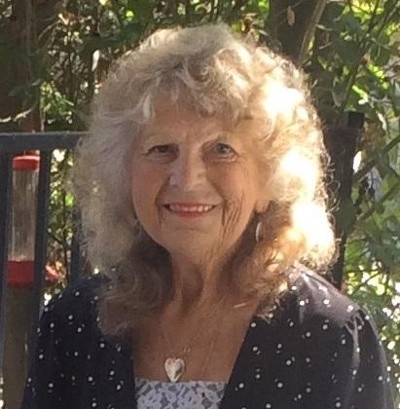 Edwina Joanne (Freeman) Errea passed away peacefully with family by her side on August 23, 2019.

Joanne was born August 5, 1943 in Paso Robles, CA as the first child of Tom Freeman and Emily McCor-nack. Joanne was proud that she was named for both of her grand-fathers, Edwin and Joe. She came home to a small two room cabin high in the hills east of San Ardo, referred to as the Upper Place on the Freeman Ranch. Life was good chasing chickens and playing amongst the oaks.

Then it was time to start school and the family of now four moved down to the Lower Place where it would be easier to get to school and they added two more kids after the move. Joanne was a bit nervous on that first day of school, Emily dropped her off at the classroom only to find Joanne already back in the truck upon her return. Joanne graduated from San Ardo Elementary School and then King City High School in 1961. One of her favorite stories was that her Mom sent notes to the principal, Mr. Fischer that Joanne had been absent because they were rained in.

Decades later, Mr. Fischer visited Emily and after having to go over the Pancho Rico creek crossing he then apologized to Joanne for not believing her all those years back. It was in high school that she met lifelong friends, Jean Gonzalo, Mariam Davis and Norma Jean Tognetti Noble. During her teens she also met her best friend Mary Tucker Kalar, whom she talked to daily for decades.

After high school, Joanne attended Dental Assistant School in San Francisco but after working with a dentist in King City, she decided it was not for her. She then worked at the world famous San Ardo Cherry Orchard. In 1963 she began a 52 year career as a secre-tary, first for Jess Harrison Construction, then Swift Tectonics, Rich Sand Company and finally at San Ardo Water District.

Joanne was also the bookkeeper for Don Brown Farming where she reconnected with his daughter, Donna Brown Fugitt. She was most proud of her time with Jess Harrison and would point out all the winding high-ways his company built across California when she travelled with family. She really enjoyed the Water District, many will remember her as the, “Water Lady”, and for her hand written cursive water bills each month.

On June 28, 1969, Joanne married Frank Errea from the ranch next door. They were married at Mission San Miguel and their reception was the first event at the new Expo building at the Mid-State Fairgrounds. It was a large event and still talked about today. Frank and Joanne moved into the town of San Ardo and eventually bought her boss, Jess Harrison’s house where they remained for their lives.

Joanne was always there for her family through thick and thin. She talked to her sister, Kathy and niece, Dusty everyday of which a huge hole is left with her passing. In the past six years it was her grandnephew, Tommie that brought her delight. She made sure to tell everyone about him and how proud she was that he was named after her Dad, Tom.

Joanne had been a long time member of the San Bernardo Grange and had held offices. She had previously belonged to the Rebekahs in King City and TOPS in Paso. She loved driving to town, Paso during the week and King City on Saturdays. Joanne loved a good chit chat, whether at the bank, pharmacy or Carl’s Jr. (her favorite). Joanne loved shopping, driving thru the ranch, local his-tory, lots of plants, especially roses of which Frank called man eaters when he had to do yard work, talking on the phone and trips with Frank to Morro Bay for fish and chips or drives around by the lakes.

Joanne is survived by her sister and brother-in-law, Kathy and David Rossi, niece Dusty and her husband Chris Johnson, grand-nephew Tommie Johnson, all of San Ardo. Aunt Mary Rasmussen of Paso Robles and Aunt Nila McCornack of Shandon. Great friends, Mary Kalar of Clovis, Donna Fugitt of San Ardo, Jean Gonzalo of Bakersfield and numerous friends and family. She also leaves behind her beloved poodle, Novia, her almost 30 year old Cockatiel, Mickey and her singing canary, all of whom Joanne put in Tommie’s care.

Joanne was preceded in death by her husband, Frank Errea, whom she married 50 years ago, her parents, Tom and Emily Free-man. Her Dad, Tom left us too young and gives her family a lot of peace knowing that she gets to see him again.

Sincerest thanks to all of the wonderful staff at Danish Care Center in Atascadero, Central Coast Home Health in Paso Robles and everyone who helped Joanne thru the years.

There will be no formal services and a private burial, where Joanne will be laid to rest between her Dad, Tom and her husband, Frank.

In lieu of flowers the family asks that you take a drive over to Morro Bay sometime for fish and chips and enjoy the scenery. Donations may also be made to Tommie’s school for the scholar-ship fund that gives scholarships to graduates from Bradley School. Bradley School, Marjorie Vicente Scholarship Fund (MVSF), PO Box 60, Bradley, CA 93426.