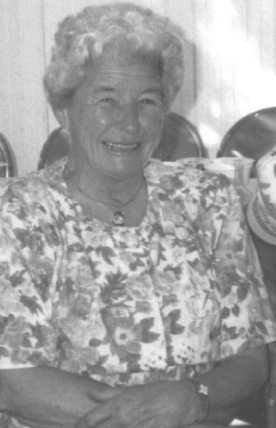 Ruth Viola Records passed away on August 9, 2019 at Stanford Hospital at the age of 94.

She was born in Reno, Nevada on August 22, 1924 to Edward & Louisa Records. She attended Reno High School and graduated in 1942. She then attended nurses training in San Francisco and after she graduated she went to work for the Veterans Hospital in Reno for a few years.

She then moved to Salinas and worked at Salinas Valley Memorial Hospital as assistant director of nursing for eight years. In 1962 Mee Memorial Hospital in King City was ready to open and they were advertising for an administrator. She was interviewed by L. H. & L. M. Andrus and was hired.

Ruth went to work at the old hospital in May 1962, the new hospital opened in October 1962. Ruth helped make the transition from the old facility to the new one which was quite a job. Ruth left the hospital in 1976 and went to work for Dr. Fassett at the Gonzales clinic until 1989 when she retired.

For 30 years Ruth enjoyed going to Fort Ross abaloning. She had met a couple in Tahiti and they had a cabin right on the coast. They would call Ruth when it was going to be a good low tide and off she would go accompanied by Roberta Oswald.

For 55 years Ruth lived in Bitterwater on the Oswald Ranch. She loved to read, travel and work in the garden. She was a member of Silver Kings & Queens and the Mee Memorial Hospital Service League for years. Ruth also liked to go to Reno several times a year to see her nephews & niece, her other niece lives in Washington state. Ruth loved her Giants and 49er’s as well as the Hartnell plays, and, of course all of her animals over the years.

Ruth was preceded in death by her 3 sisters and brother. She was cremated and buried next to her brother at the Masonic Temple Cemetery in Reno.

Ruth is survived by her nephew, Tim Rowe, (Rose); Kim Rowe, (Candice) of Reno; niece Karen Rowe of Reno and Terrie (Rob) of Washington state and long time friend of Roberta Oswald and the entire Oswald family, they all loved Ruth and her stories.

A celebration of life will be held at the Oswald Ranch on Easter 2020, when all of the Oswald families will be here.