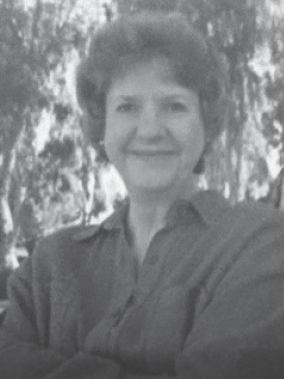 Mom was an early riser even at 95. At 4 am the morning of July 31 she rose to a different dawn. A new light called her forth from this life. She was ready. As she lay in bed for nearly a week going in and out of sleep and wakefulness and she knew she was preparing for a new journey. A few days before she passed on she told daughter Raye Ann that she “didn’t think she would go like this,” perhaps meaning that she would rather have been more alert and in tune with things.

However, two days before she got on that beautiful white horse to prance across a lovely flower strewn meadow she was wakeful and responsive. She heard everything we said clearly and responded with smiles and a nearly clear voice. She was sharp mentally. We all got to tell her stories of her brother, our Uncle Baird Barnett, her father & mother, Gus & Jerry Barnett, and of course her true, life-long love, Raymond J. (Rusty) Houx who preceded her in death in 2013 at 93 years of age. She kissed his photo goodnight every night before going to sleep even in her last days. He was one handsome guy even late in life. Perhaps now she is joined with dad and he can do what he loved to do, kid her playfully. It made her smile.

Mom, according to her oldest grandson Orion “was the nicest grandma in the world.” It’s just fine that other people can make that claim about their grandmas too. She loved having her grandkids over for a week at a time in the summer when they were in grammar school. Orion, Josh, Shone, Guy, Tom and Bradi would line up ac-cording to age and height and always follow that pecking order. They were small enough at a young age to sleep head to toe on a large mattress on the living room floor. She would walk them to the local swimming pool every day for a load of fun and splashing about. Afterwards she would feed these hungry little tikes a big lunch. They so loved grandma.

Mom was a fantastic mother who also worked part-time and full time at several jobs through adulthood: an operator for Bell Telephone (remember calling in to ask the time?), the local medical clinic, Vincenz Construction Company (EMCO), King City Creamery, and a local jeweler, Eddie El Helou, all in a secretarial/book keeping capacity, except that she was a doctor’s trained nurse by her Uncle Len Hughes Andrus at the clinic acting with the competency of a nurse. She was a very able and reliable employee who drew compliments and respect from all her employers. I wish she could have fulfilled her dream of becoming a CPA. She was very intelligent and would have done very well. Like a lot of smart post-war women she didn’t get a college education which was unfortunate.

Mom was born in Payson, Utah December 21, 1923 in the old family home where her father was born and died, and where her maternal grandmother passed as well. She recalled stories as a little girl when her mother and she would take hot lunches and fresh baked bread to the men working in the fields nearby. She recalled how canning fruit and vegetables was a way of life, storing them in a fruit cellar for future use. I was touched by the seeming purity of that pastoral lifestyle before there were many cars or telephones, no TV, and certainly no computers or smart phones. People actually visited neighbors by walking to their homes and sitting on the front porch talking for hours. Of course, homemade dishes and desserts were always brought to share.

Mom was always strong and healthy as a child and adult. She loved playing volleyball and softball with other kids. As a young girl she would babysit relative’s kids. An older friend once said, “Is it safe for this young girl to wheel that baby in a buggy?” To which mom’s aunt replied, “That baby is safer with June than in the lap of Jesus.” Mom was always trustworthy and consummately dependable and reliable.

Was she an excellent cook, hello! Fantastic! She loved being in her kitchen preparing dishes from scratch. There were no processed microwavable foods. In fact, most food was healthy as they were extracted from natural sources, like milk, meat, bread, none of which were full of preservatives, GMO’s, or steroids, and very few pesticides if any. People were healthy. They worked hard, and walked and played. Mom’s potato salad is still the best our family has ever tasted, and is the standard that has stood decades of tasting many potato salads. Her string bean and bacon dish was to die for as well as her Sunday meatloaf dinner.

Mom was physically and mentally strong. Stubborn is one description. I think she had to assert herself in a male dominated world. Dad was not a macho, under my thumb man at all. He was kind and fair minded. He and mom consulted and deferred to one another concerning all family and home decisions. Both she and dad worked and shared in taking care of us kids. They both did housework; as did we, taught at a young age to wash the dishes, iron clothes, take out the trash, mow the lawn and care for the yard, and sew yes, as the eldest son learned how to sew on her Singer sewing machine as a teenager. It was a blast stitching up tears in my jeans.

Mom was a good listener. She was intuitive as well, mysteriously always knowing what we were up to. Both she and dad were dedicated to helping us with our homework each school night. And she loved it that we had the freedom of the weekends to play, go to the movies, and have friends over. Our home was a haven for our many friends. Sunday was back to the books though. She made us great lunches every night for school the next day.

Mom was one of the original founding members of The Stage Hands in 1984, which has brought hundreds of wonderful productions to the Robert Stanton Auditorium and the St. Mark’s Episcopal Parrish Hall dinner shows. She and dad were early members, as was Raye Ann and her husband Lincoln Hatch, and our honorary sister, Cindy Brown, who are still active. Our brother David Houx acted with them in the eighties.

I miss mom’s intelligence and laughter. She was a sweet person even though she could lay down the law. I hope so deeply that her soul is moving in meaningful terrain. I can’t help but feel some aspect of her will live again, only more richly.

We love you dear mom and could never have enough of you!

Family and friends will be notified of private memorial dinner.