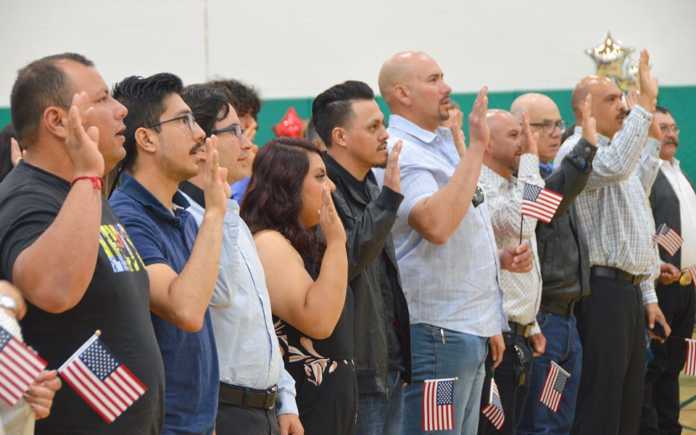 89 new US citizens sworn in at South County ceremony

SOUTH COUNTY — The United States welcomed 89 new citizens into the country last Thursday during a swearing-in ceremony at Fairview Middle School in Gonzales.

Before a crowd of family and friends inside the school’s gymnasium, the new citizens took the oath of citizenship administered by James Wyrough, the field office director for the U.S. Citizenship and Immigration Services (USCIS) in San Jose. In total, the new citizens represented 20 countries, including Afghanistan, Germany, Mexico, Philippines and Canada, among others.

It was all pomp and circumstance as the crowd was treated to the Star Spangled Banner, a color guard performed by the Soledad High School Navy JROTC and a keynote speech by local Congressman Jimmy Panetta (D-Carmel Valley).

Panetta, whose grandfather settled in Monterey after emigrating from the Calabria region of Italy, said the story of the American dream is one of immigrants. Panetta said he was the answer to one of the questions on the citizenship test taken by those who were sworn in.

“What makes us exceptional is that we’re also a nation of risk-takers,” Panetta said. “You may have left your birth country behind, but you bring with you the best qualities and spirit of that country.”

After a series of speeches by local officials, including Gonzales Unified School District Board President Sonia Jaramillo and Gonzales Mayor Maria Orozco, the new citizens watched a welcome video prepared by President Donald Trump and a rendition of the song, “America the Beautiful.”

Officials stressed duties of citizenship, including registering to vote and participation in the upcoming Census. Then there are the other duties, of course, like filing for income taxes and jury duty.

After the Sept. 5 ceremony concluded, the applicants’ first act upon after taking their oaths was to take the Pledge of Allegiance and were issued an official certificate.

Some, like 55-year-old Heike Johnson, got busy filling out voter registration forms.

Johnson, a 29-year resident of King City, moved to the United States from Germany after meeting her then-husband, a U.S. Army servicemember, while he was stationed overseas. Even though they are now divorced, Johnson said they maintain a relationship.

When asked how she felt on her new status, Johnson felt “awesome.”

“This is the best feeling,” she said. “It means a lot to me. I feel so accomplished, I feel so emotional.”

Tara Loosbrock, who hails from Saskatchewan, Canada, said she began the process of becoming an American citizen in January and took only nine months. She is a resident of Santa Cruz and celebrated that evening with a group of friends.

Marina Yerenia Leon was brought to the United States when she was 18 months old from the state of Michoachan in Mexico. Leon married her husband 10 years ago, which started her path to becoming a citizen.

Having the ability to vote is Leon’s biggest motivation for earning citizenship.

“I want nothing more than to be able to vote for my own kids’ school board,” Leon said. “That’s my big passion right now. That’s the beginning, especially with the primaries coming up.”

In order to become naturalized, or become a U.S. citizen, applicants must complete a series of steps that include filling out a form N-400, getting fingerprinted, take an interview and an English and civics test, and then take an Oath of Allegiance.

Before they begin the process, however, applicants must first meet eligibility requirements, such as being able to speak and understand English and having good moral character.

More than 756,000 people became naturalized in the United States in fiscal year 2018, according to the USCIS.

KING CITY — Sol Treasures hosted a small outdoor concert with a pandemic-era format on Feb. 12, with 25 vehicles in attendance. The Heart and...
Read more