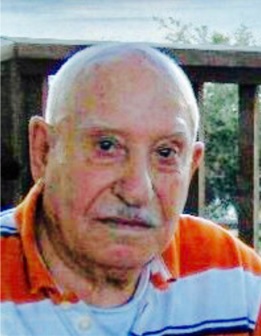 Francesco DiMarco (Nonno) age 95 passed away Friday, March 3rd. He was diagnosed with cancer throughout his entire body in Mid September and given only 2 months. In Francesco fashion, he surpassed any expectation of survival. He battled this illness with courage and strength till the very end! He was surrounded by his children and grandchildren in his home as he made his final journey into the heavens.
He lived in King City CA with his Son In law, Carlos Ruiz and daughter Maria Ruiz along with his granddaughter Maria and great grandson Michael. Although he was born in Carnegie Pennsylvania on July 22 1921, and very proud to say he was an American, he didn’t speak any English. Francesco was actually Italian and served in the Italian military during WW2.
Francesco was married to his beautiful wife Maria DiMarco for 68 years until she passed in January 14th, 2015. They married in Italy and had 4 children, Son Antonio DiMarco, Angelo DiMarco, Vincenzo DiMarco and daughter Maria Ruiz. They came to America in March of 1968.
Francesco had 4 siblings that lived in the US, Sam (deceased), Domenica (Mimi) recently deceased, Vincenzo (Jimmy) and Sarafina. They mostly lived in the Los Angeles area. After a job opportunity arose, Francesco and his family moved to King City CA. There he’d spend the rest of his senior years.
Nonno Francesco and Nonna Maria had lots of grandchildren and great grandchildren, Frank DiMarco, Dorina Timbol, Enza Hibler, Carlos J Ruiz jr, Elizabeth DiMarco, Angelica Chadick, Angelo DiMarco Jr, Maria Ruiz, Sara Hernandez, Marcella Gutierrez, Romina Rosas, Anthony DiMarco, Joel DiMarco, Yesenia DiMarco, great grandson Nicolas DiMarco, Paulina DiMarco, Alexandra DiMarco, Steven D Timbol 2, Antonia Francesca Timbol, Carlos Jorge Ruiz 3rd, Natalia Ruiz, Tyler DiMarco, Jaxon Hibler, Sienna DiMarco, Michael Ruiz, Anyssa DiMarco, Atiana Gutierrez, Isabella Hernandez, Anna DiMarco, Leah Hernandez, Isaiah Rosas, Sam Rosas, Giovanni Gutierrez, Sid DiMarco and great great grandson Noah Hernandez.
Nonno Francesco was a true prankster! He took every opportunity he could to try and somehow startle you. You could always expect the napkin tickling your ear as if there was some annoying fly that would not leave you alone! We always had to go along with it just to watch the laughter it gave him.
If you ever wanted to know if Nonno was not feeling well, just invite him to a casino! He was the master of the slot machines and could sit there for hours! Scratchers were also on his pass time list. He would get one from where ever, when ever!
Nonno’s ultimate pass time was truly his family. The laughter of his family, grand kids and his great grandkids was like music to his ears. Family is what Nonno was what he was most proud of.
Services will be held on Saturday, March 11th, 2017 at the First Baptist Church in King City, CA at 1:00pm, reception to immediately follow. For more info please (831)385-3819
Arrangements were entrusted to Eddington Funeral Services, 429 Bassett St., King City, (831) 385-5400, www.EFS-Cares.com .

Jane was born in 1930 during the beginning of the Great Depression to Alfred and Pierina Luchessa, the second to the youngest of six...
Read more

Nearly half of King City High students return to campus