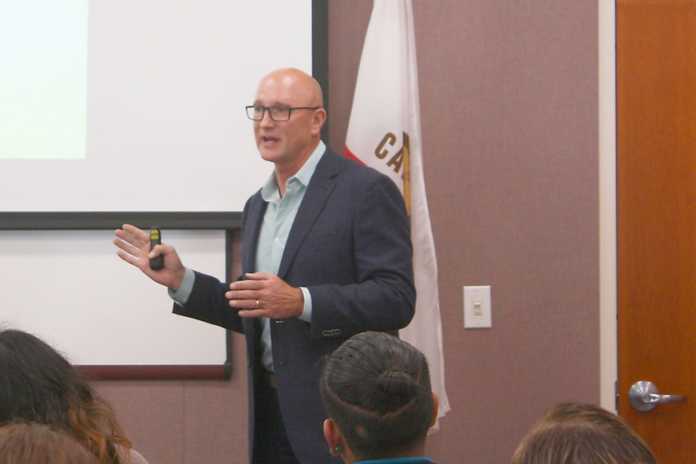 Located in Salinas, the Indus Holding Company focuses on cultivation, manufacturing and distribution of cannabis. The company has a dispensary license but has not opened a dispensary yet.

“We have a 10-acre farm, manufacture in the City of Salinas and we do extraction,” McMillin said at the Sept. 27 meeting for PARTS South County Coalition in Gonzales. “We make edibles and we distribute throughout the state of California.”

The Indus Holding Company started by approaching the City of Salinas for a distribution permit and an extraction permit.

The company also had to go to the County of Monterey for a cultivation permit and then turned to the State through the California Department of Food and Agriculture.

“One of our big problems is the black market,” McMillin said. “We are competing with people who are still not compliant.”

The cannabis industry begins with the cannabis plant, which can be two different varieties, Sativa and Indica.

The difference between the two strains are that Sativa is a creative high for hiking or artists. Indica is for those who have trouble sleeping or need to mellow out.

According to McMillin, most cultivation centers have only female plants and will not use male plants because when the flower is pollinated the flower growing will die and is the source of the cannabis business.

After the flower has grown and cut, the next phase is the extraction, which Indus Holding Company uses a volatile extraction license similar to butane honey oil.

The room where the extraction takes place includes several safety measures to keep the facility and workers safe.

Once the extraction has taken place, the cannabis can go into several different processes infused into chocolate, made into a substance similar to peanut brittle, even put into cookies or other edibles.

“The State says one dose of cannabis in an edible form is 10 milligrams,” McMillin said. “ A dose of alcohol in California is roughly a 12-ounce beer, a six ounce glass of wine, or a 1 oz shot of spirits.”

Although the doses are similar, McMillin says that doesn’t mean the cannabis and alcohol will act the same on a 21-year-old human. McMillin suggested that starting with a 10 milligram cannabis cookie would be too much and should be cut in either a half or a quarter for those trying cannabis for the first time.

Dose suggestions are written on the package of edibles.