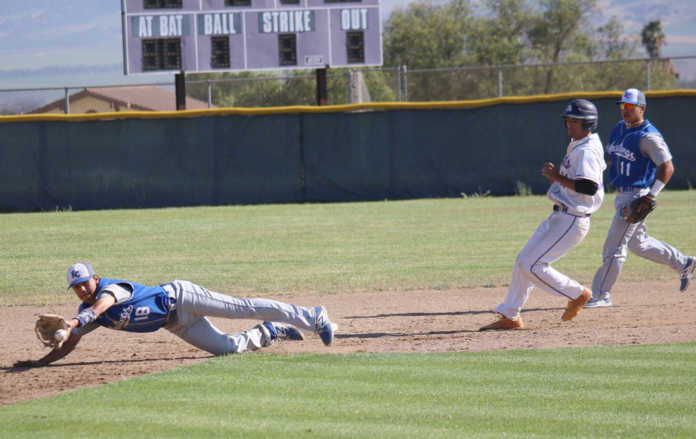 SOUTH COUNTY — Two epic games that were decided by single runs marked the end of the league season for the Soledad Aztecs and King City Mustangs. Home wins by the two teams resulted in a four-way for second place in the Mission Trail Athletic League with Greenfield and Carmel.

King City defended their turf with a 2-1 win on Tuesday, May 9, and the Aztecs claimed an 11- 10 win over the Mustangs last Friday afternoon in Soledad. While the Mustangs and Aztecs battled, the Greenfield Bruins split their games with league champions Pacific Grove and the Carmel Padres swept the Marina Mariners. All four teams finished with 13-5 league records.

In the first game between Soledad and King City, David Ortiz stole home in the fourth inning in what would be the winning run. Clay Barbree earned the pitching victory, throwing 6 2/3 innings.

John Serrano came in to get the last out.

“It was a good old fashioned game between Soledad and us,” said King City head coach Lorenzo Espino. “There was good pitching and good defense and we ended up stealing home to take the lead.”

Soledad had the runners on late in the game but unable to get the timely hits against Barbree or Serrano.

“We had many runners in scoring position and many opportunities to score but we could not get the big hit,” said Soledad head coach Damian Ryan. “We felt more than a few breaks did not go our way. King City is too good of a team to have to compete with the “third” team. Nonetheless, we lost 2-1 with Ben Pajas going 3 x 4. He (Pajas) was at the plate with three hits already, with runners on third and second. However, he grounded out to shortstop. Overall we competed well all things considered. King City’s runs were the product of two controversial calls and an error on our part. I preach to the kids to execute and we fell short of our standards.”

In the regular season finale in Soledad on Thursday the Aztecs broke out to take a solid lead but the Mustangs fought back but came up short in the 11-10 loss. Soledad and King City were tied until the bottom of the seventh when the Aztecs scored the winning run.

“We were down 9-1 and came back to tie it at 10-10,” said Coach Espino. “We fell behind early but the boys never panicked and we just kept chipping away and eventually we tied it. Brian Lopez started but only went 1 2/3. He didn’t have his normal command of his pitches so I pulled. John Serrano came in and did a great job keeping us in the game. Jose Arreola finished the game but ended up with the loss.”

Aaron Rodriguez led Soledad with a 3 x 5 hitting performance and had three stolen bases and Chris Villarreal had a hit and three RBI’s. Matt Hernandez went 2 x 4 with two RBI’s, Anthony Ramirez was 2 x 2 with a double, an RBI and three walks. Robbie Santa Ana was 2 x 5 with two RBI’s and Adrian Gutierrez had a hit and smashed the game-winning hit.