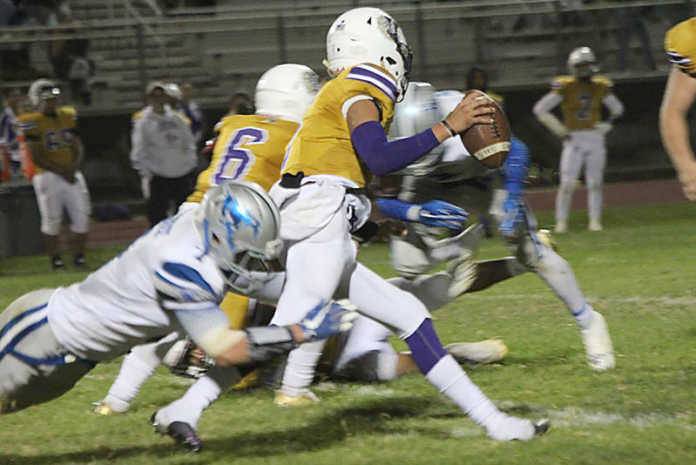 SOLEDAD — Key plays in critical moments enabled the King City Mustangs to improve to 2-0 in the Mission Trail Athletic League after a 24-17 win over the host Soledad Aztecs on Friday night in Soledad.

Luis Luna guided the Mustangs at signal caller and Clay Barbree had two defensive sacks and a touchdown on a pick-six to help King City overcome the Aztecs.

Barbree’s 85-yard interception in the third quarter of Soledad quarterback Robbie SantaAna was the only second half score of the game. Barbree assured the win as he sacked SantaAna from his defensive end position to run out the clock on Soledad.

“On the last possession for Soledad we told our players to be on the lookout for any trick plays and to use a timeout if they had to,” said King City head coach Mac Villanueva. “Clay (Barbree) just came from the outside and made the play we needed to win the game.”

Soledad playing without leading rusher and All-League running back Emanuel Ortega who missed the game with a shoulder injury, had too many dropped passes in crunch time against the Mustang defense.

“In the first half we had the passing game going,” said Soledad head coach Frankie Berlanga. “The final two quarters were a different story as we couldn’t come up with the football when we had open receivers. Our receivers were just dropping too many passes.”

Soledad looked ready to have a good passing night as they began the contest with a 50-yard touchdown pass play from SantaAna to Angel Olivas. A point after attempt after the score by Ulises Uribe gave the host team a 7-0 score.

The Mustangs cut the lead to 7-3 minutes later with a 27-yard field goal by Max Pallas. After the kickoff by King City, Aztec receiver David Madrigal beat the Mustang defensive backfield on a deep pass from SantaAna to earn a first down on the Mustang 33-yard line. Soledad went to the air again and gave up the ball on an interception by Luna on the three-yard line. King City then used the running of Matt Morales and Cedrick Perez, and the passing from Luna to Luis Briseno and Ponch Jimenez to march down the field to set up a one-yard touchdown play by Alex Villasenor. Pallas then added the PAT to give King City a 10-7 lead.

With less than four minutes to play in the second quarter Uribe tied the game at 10-10 with a field goal to tie the game at 10-10. SantaAna made his presence felt on defense as he picked off a pass from Luna and ran for a 65-yard touchdown. A PAT by Uribe gave Soledad a 17-10 advantage. King City then went to the air and ended the second half with a touchdown pass of 10-yards from Luna to Briseno. The successful PAT by Pallas ended the first half with the teams tied at 17-17.

After being double and triple teamed when he was on offense, Barbree made the play of the game at the 9:13 mark of the third quarter with his interception off a pass thrown by SantaAna.  The PAT had the Mustangs up, 24-17 with plenty of time on the game clock.

The defenses took over from that point as they kept the opposing offensive units from mounting a scoring drive. In the final minutes the Aztecs had the ball one final time but were denied any chance of a comeback on the sack of SantaAna by Barbree. The Mustangs had lost three straight games to the Aztecs and were elated to earn the victory. King City is now 3-2 overall and Soledad is 3-3 overall and 1-1 in league.

“Soledad came into the game and made plays that put us in a hole,” said KC Bronco head coach Evan Petrovic. “They played a great game. I really liked that our players didn’t give up and were still competing into the fourth quarter.”

The Mustangs continue league play on Friday at Scotts Valley and will celebrate Homecoming on Friday, Oct. 13, in a game with the San Lorenzo Valley Cougars. Soledad has a bye this week and will not play until a Oct. 13 away game at Pacific Grove.