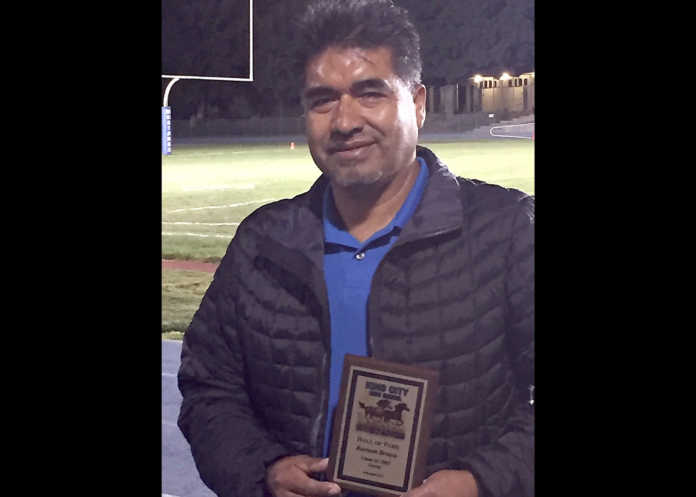 The Pirates moved the football but were kept out of the end zone for most of the night by the Mustangs on Hall of Fame Night.

“Our defense gave up a touchdown in the first half but kept Stevenson from making any serious threats in the last two quarters,” said King City head coach Mac Villanueva. “Offensively we did what we are able to do although in was tough to run because Stevenson had eight guys in the box to slow us down. On our first drive we should have scored but we lost the ball when the ball was stripped on a long run.”

The Pirates did not do much against King City on the change of possession and gave the ball back to the Mustangs after the ball sailed over the quarterbacks head. After gaining a pair of first downs King City scored the first points of the game on a four-yard touchdown run by Alex Villasenor. The Mustangs led 6-0 after a missed point after attempt.

Stevenson tied the game at 6-6 late in the second quarter on a four-yard touchdown run by Alex Murray. In the second half the Mustang defense forced a punt after sacking Pirate quarterback Hayden Roth for a five-yard loss.

On the punt Matt Morales caught the ball and run up the home sideline and ran as far at the Stevenson 37-yard line. As he was forced out of bounds Morales was hit late and the Pirates were penalized giving the ball to King City on the 27-yard line.

The Mustangs capitalized on the great field position as Morales scored on a four-yard touchdown at the 7:37 mark of the third quarter. A successful PAT by Max Pallas gave the home team a 13-6 advantage. On the next offensive series the Mustangs forced another punt by the Pirates.

This time King City marched down the field and reached the Stevenson 15 where Luis Luna passed the ball to Luis Briseno for a 15-yard touchdown pass with 4:14 left in the quarter. Another PAT by Pallas gave the Mustangs a 20-6 lead. King City completed their scoring in the fourth quarter on a 29-yard pass play from Luna to Clay Barbree. The third Pallas PAT gave King City a three-score lead at 27-6.

Cedric Perez led the Mustangs on the ground with 43 yards on 15 carries and Morales added 27 yards on seven carries. Luna threw for 206 yards on an 11 of 23 passing performance and threw two touchdown passes. Briseno led the King City receiving corps with 105 yards on six catches and a touchdown and Barbree had three receptions for 55 yards and a touchdown.

At halftime of the varsity game Ramon Bravo was formally inducted into the King City High School Hall of Fame. The soccer great helped make the Mustangs a soccer power in the late 1980’s. Bravo was very excited to be chosen as member of the Hall of Fame.

“I received a call from Ken Kline in the spring and it very good to hear from him,” said Bravo. “When he told me I was voted to the Hall of Fame it was something I did not expect but I felt it was a honor to be chosen.”

King City (1-0 in league, 2-2 overall), continue Mission Trail Athletic League play on Friday when the hit up 101 to play the Soledad Aztecs (1-0 in league, 3-2 overall). The Aztecs began league with a 23-21 win over the Carmel Padres.

“We have had some battles against Soledad the last five years,” said Coach Villanueva. “I expect that we will have another tough game against them on Friday.”

The King City Broncos are 1-0 in the MTAL as they beat the Stevenson Pirates, 36-12. Bronco head coach Evan Petrovic praised his offense for putting five touchdown drives together.

“The boys played for all four quarters for the first time this year,” said Petrovic. “We need to improve this week and clean up some things offensively and defensively. The boys are doing the best to get better every practice.”