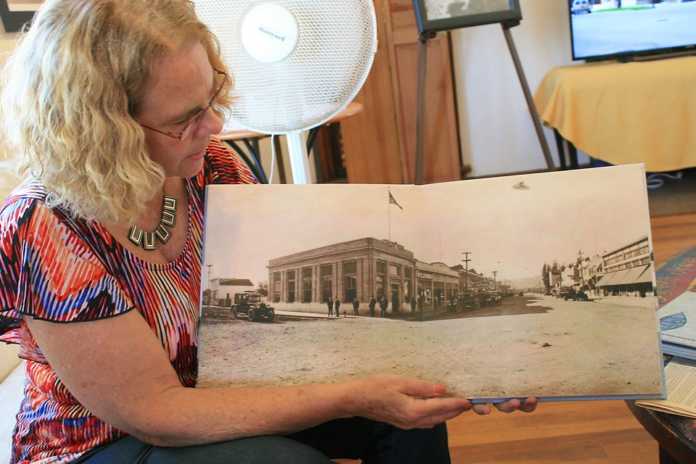 Back to the future

Photos by Ryan Cronk
Karen Jernigan shows a book of pictures taken of an early King City. She and her husband John provided a collection of historic photographs of the town for a new exhibit at Sol Treasures.

Below, historic photographs of King City are on display at Sol Treasures, thanks to John and Karen Jernigan (far left) and the support of Board President Sonia Chapa (second from right) and Gallery Manager Angel Monteagudo; and photos of the former King City High School building on Broadway Street circa 1913 are on display.

KING CITY — A new multimedia exhibit showing King City’s past, present and future is currently on display at Sol Treasures Gallery and Gift Shop, featuring vintage reproductions of photos and videos from a bygone era.

The exhibit, which is in conjunction with Sol Treasures’ 10th anniversary celebration, includes historic images taken from longtime residents John and Karen Jernigan’s photo collection, along with a 16 mm film circa 1949 that gives a glimpse into King City life back then.

Also on display is a video slideshow, offering a side-by-side comparison of the locations in the exhibit with modern-day shots photographed by Alex Arce.

“This is our 10th anniversary this year, and we wanted to do something that would commemorate the past,” said Gallery Manager Angel Monteagudo. “This was the perfect fit for us.”

Photos in the exhibit — chosen among thousands from the Jernigans’ collection — depict the area’s bridges as well as flooding that occurred before the installation of dams, downtown buildings, city life and local schools.

“Everybody who went to school here recognizes the buildings. They know what the old school used to look like, but they don’t know where it was placed,” Monteagudo explained. “I think those are cool things about coming in here and seeing them. You get that perspective of where things were or where they still are, what things are still kept and what things have been changed.”

The Jernigans — known for their love of history — started collecting historic photographs of the city about 10 years ago, accumulating so much stuff that one of the rooms in their house is now dedicated to King City memorabilia. The collection is made up of mostly photos and postcards, which are “really important to our city because a lot of the early pictures are based on postcards of King City,” said John Jernigan.

The collection dates back to the early 1900s and has grown to include several old films taken of the town, one of which is playing on a loop at the gallery.

“King City, in the past few years, has gone through some really difficult times, and I think there is a lot to celebrate about King City,” said Karen Jernigan. “My hope is that people would see that there are people from the past who really cared about this town and wanted it to be the best that it could be, and maybe we haven’t celebrated that enough.”

The Jernigans are also offering walking tours of the city by appointment. Each tour lasts about an hour and 15 minutes, strolling through the business district along Highway 101 in downtown King City. A book of historic photos — published by the Jernigans through Shutterfly and currently on display at the gallery — is brought along during the walk to help provide a then-and-now comparison for the buildings.

“I hope that people will come and see these images and find ways that we can continue to enhance and celebrate what we have here, which I think is really special,” Karen Jernigan said.

The exhibit also includes illustrations of a few construction projects in the works, representing King City’s future. These projects include Monterey-Salinas Transit’s new South County Operations and Maintenance Facility on San Antonio Drive and the Multi-Modal Transportation Transit Center on First Street, and the City of King’s proposed roundabout at Broadway Street and San Antonio Drive and the Downtown Plaza across from the King City Library on North Vanderhurst Avenue.

“We’re beautifying a lot of King City, and (the exhibit) shows the architecture of what the city used to look like,” Monteagudo said. “… It’s just nice to see our history of our city and where it’s going moving forward.”

Other exhibit contributors include Casey’s Printing, which has some vintage items related to the early publishing days of The Rustler on display, and Monterey County Agricultural and Rural Life Museum, which contributed a few City of King memorabilia to the exhibit. A special interview with Josephine Koester also occurred, during which she recounted some early stories and fond tales about the city.

“It’s exciting to celebrate King City’s history and Sol Treasure’s 10th anniversary, and to see all the new changes happening for the betterment of our community,” said Sonia Chapa, president of the Sol Treasures Board of Directors. “We are so grateful to be a part of it.”

The King City exhibit runs through Sept. 15, with a “Meet the Historians” event set for this Friday, Aug. 24, from 4 to 6 p.m., at Sol Treasures, 519 Broadway St., in King City. Following this event at 6 p.m., Sol Treasures will host its final summer Backyard Concert series featuring the Los Vaqueros Hunting Club Traveling Band. Both events are free to attend.