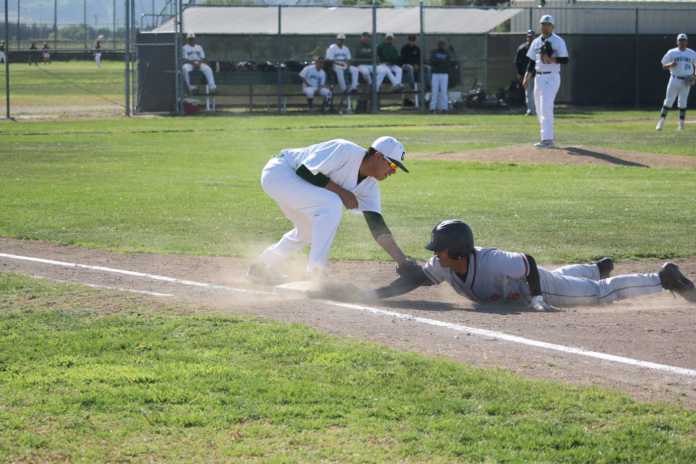 GREENFIELD — Gonzales High scored three runs in the sixth inning to snap a seven-game league winning streak by the Greenfield Bruins on Friday in Greenfield.

The Spartans trailed 6-2 in the bottom of the fourth, and outscored the Bruins 5-0 the rest of the way to win the contest, 7-6.

“I told my players when we were behind that they just had to stay positive and keep each other upbeat because there was a lot of baseball to play,” said Gonzales head coach Erik Lopez. “Xando Mendez won the game on the pitching mound and helped himself and the team with three hits and two RBIs.”

Gonzales took a 2-0 lead in the top of the third inning behind a leadoff double by Isaiah Banuelos, a single by Gonzalo Villagomez and a double by Mendez. The Bruins struck back and took the lead at 3-2 in their half of the third. Greenfield padded the lead to 6-2 in the bottom of the fourth with three runs.

Gonzales cut the lead to 6-4 in the top of the fifth as two runners reached base then moved to third and second with a sacrifice bunt by Giovanni Garcia. Banuelos then smashed a double to score the baserunners. In the top of the six the Spartans used a walk, a basehit by Mendez, a sacrifice fly by Marc Godinez and a double by Manny Vargas to score three runs to take the lead for good. Mendez went 6.2 innings to earn the win. Elijah Rodriguez threw two pitches to finish the game for Gonzales.

“In the final inning we made some uncharacteristic errors in the infield,” said Greenfield head coach Ray Green. “You can’t make errors like that when you have baserunners on.”

Oscar Hernandez had two hits for Greenfield and Daniel Mendoza, Tony Castro and JJ Rodriguez hit doubles. Gonzalo Villagomez had two singles for Gonzales and Mendez had two doubles and a single in his at bats.

In the first game of the series the Bruins defeated the host Spartans 12-5 on March 28 in Gonzales. Greenfield built a 10-2 lead through four innings then the Spartans cut the lead in half at 10-5 with three runs in the bottom of the fifth. The Bruins closed out the victory with single runs in the final two innings.

The Bruin offense produced 12 hits and were led in hitting by Diego Mendoza’s two basehits and two doubles. Hernan Perea added a double and Jaime Rodriguez and JJ Rodriguez had basehits. Oscar Hernandez earned the pitching win and finished with five strikeouts.

Greenfield is now 7-1 in the Mission Trail Athletic League and 10-5 overall. The Bruins hosted the Anzar Hawks yesterday and play the Hawks in San Juan Bautista on Friday.

Gonzales is 3-5 in the MTAL and 5-6 overall. The Spartans played at Pacific Grove yesterday and host the league-leading Breakers on Friday.