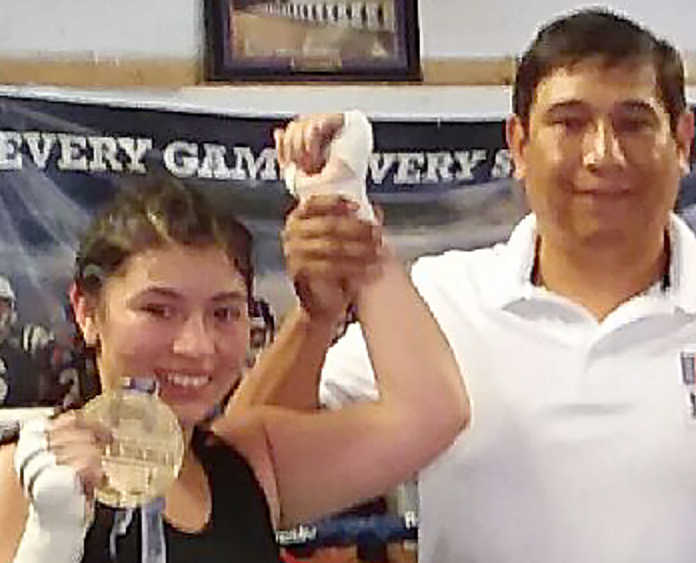 SALINAS — Marlen Arreola and Kevin Perez of the San Ardo Boxing Club were victorious in their matches on Saturday night at the Rock Gym in Salinas, coming home with unanimous decisions.

Arreola, 17-year-old from San Paso Robles fought in the 132 pound weight class and defeated her 20-year-old opponent from San Jose in three two minutes rounds. Perez fought at 132 pounds and accepted the fought although his opponent came in at 139 pounds.

“Marlen was a little nervous to start the fight because she noticed that girl she fought had about half the crowd supporting her,” said San Ardo and King City Boxing Club Coach Rodolfo Tapia. “I told her that she was ready for the fight with all the training she put in and did what I told her by boxing and going toe-to-toe when she had to. Kevin did a good by boxing and landing body shot to come out with the victory.”

“Ivan Almanza lost his fight by one point,” said Coach Tapia. “He did really well putting pressure on his opponent and countering. Danny did super good and lost by split decision.”

Julio Martinez of the King City Boxing Club was scheduled to fight but did not have an opponent to fight and Garrett Mitchell of the San Ardo Boxing Club could not fight because his boxing license had expired.

The San Ardo and King City Boxing Club boxers will be waiting to fight in Fresno in a couple of weeks or travel to Northern California for shows in that part of California.