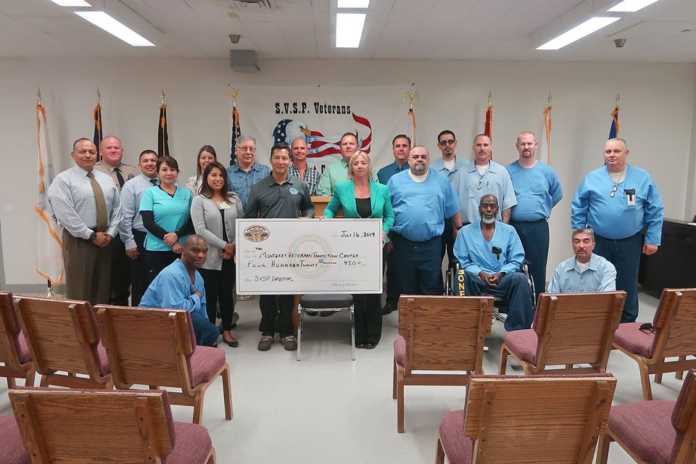 The prison’s Facility A Veterans Transition Group, made up of former military personnel, was able to donate $420 through inmate donations.

“This amount is the biggest success, since these inmates who have jobs receive about 15 cents a day,” said veteran and retired U.S. Army Ranger Tony Virrueta. “As a fellow veteran, we cannot do enough for what the Veteran’s Transition Center does to help veterans get back on their feet.”

A ceremony was held July 16 at the prison, during which the donation check was presented to the Veterans Transition Center. The presentation included speeches and support from Virrueta, prison Warden Tammy Foss, Lt. Col. Jack Murphy and Monterey County District 3 Chief of Staff Priscilla Barba.

Both former inmates graduated from the program and now volunteer for the Veterans Transition Center.

“The monies raised will go a long way to help those who served our nation,” Murphy said.

Veterans Transition Center was founded in 1998 in the city of Marina, providing services for homeless veterans and their families. Rather than only offering short-term help, the center provides transitional housing and case management programs to veterans so they can once again become employable, productive members of the community.