Some alternative July 4 activities in the works

SALINAS VALLEY — Fourth of July festivities have been canceled throughout South Monterey County, with years of tradition being quelled by health concerns with the ongoing Covid-19 pandemic.

In past years, Gonzales would host a 5K race in the morning, followed by a parade and community festival with entertainment and a barbecue. Soledad’s Fourth of July events were run by the Soledad Chamber of Commerce and included fireworks at dusk, a community festival and children’s parade.

Greenfield normally had entertainment and booths at Patriot Park for a citywide celebration followed by fireworks, and King City had a tradition of a parade and fireworks, with a car show at Wildhorse Cafe.

The concern over crowds has caused all organizers to cancel this year’s festivities. The main option for seeing colorful flares this Independence Day is now through buying safe and sane fireworks from booths, usually operated by nonprofit groups around the towns.

“Our community will be able to purchase the safe and sane fireworks and enjoy the Fourth, hopefully in a manner consistent with the county order as it pertains to face covering, social distancing and gathering protocols,” said Rene Mendez, city manager for Gonzales.

Though official events are not a possibility, one group of locals — spearheaded through Facebook by Elaine Rosales — has begun the logistical process for planning a community caravan to roll through King City. While it isn’t a full parade, participants aim to bring festivity to the streets in similar spirit to graduation and educator caravans that have occurred throughout Salinas Valley.

The group will begin lining up at 8:30 a.m. at the corner of Division Street and San Lorenzo Avenue and plans to roll out from that spot between the fairgrounds and the city park at 9 a.m. sharp, with latecomers invited to join at the back of the pack.

“Transporting and discharging illegal fireworks can get you in trouble with local law enforcement,” said Langborg, who explained the only legal fireworks are safe and sane, indicated by a fire marshal insignia on the package.

Fireworks are recommended only in safe areas away from combustible items and vegetation. But even then, the fire danger is not over.

“After discharging your fireworks, allow them to cool and then place them in a bucket filled with water,” Langborg said. To be thorough, he recommended soaking the discharged fireworks in that bucket for at least 30 minutes before putting them in the trash.

Out of consideration for neighbors, it is also recommended to not point fireworks toward another’s property and not to use them late into the night.

“Have a garden hose, shovel and/or a fire extinguisher ready just in case an unexpected fire happens,” Langborg said. “If a fire does happen, call 911 as soon as possible. It’s always better to be safe than sorry.”

Langborg recommended most of all to “have fun and create some safe memories with your family.”

KING CITY — Gun-mounted cameras have been added to the technology in use by officers of the King City Police Department, the...
Read more
Local News

MONTEREY COUNTY — Health officials throughout the nation have said testing is an essential factor in the battle against the novel coronavirus...
Read more
Local News

VIRTUAL PARADE GONZALES — With festivities around the state canceled due to Covid-19 concerns, the City of Gonzales will...
Read more 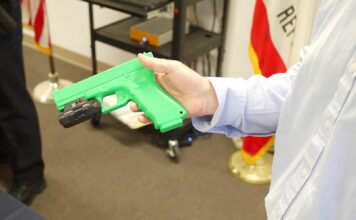 Window on the World Column: Forever is a very long time