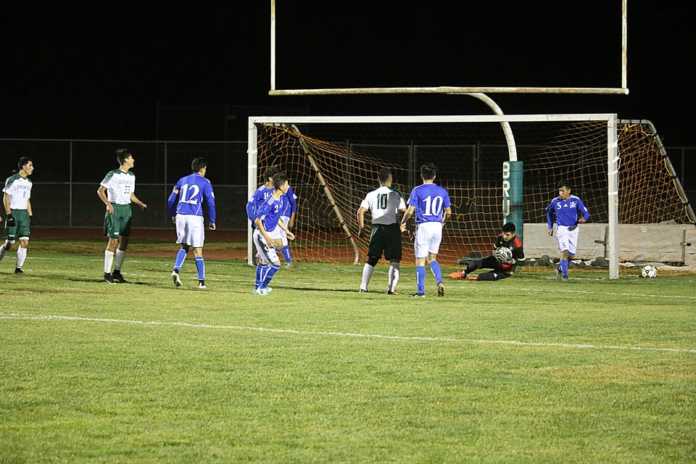 SOUTH COUNTY — The Mission Trail Athletic League season opened up last week with the Greenfield Bruins hosting the King City Mustangs and the Soledad Aztecs hosting the defending league champion Gonzales Spartans. On Friday at Greenfield the visiting Mustangs defeated Greenfield by a 4-1 score and at Soledad the Aztecs defeated Gonzales, 3-1.

In the King City and Greenfield game goals were scored by the Mustangs Daniel Gonzales, Jonathan Mosqueda, Marco Cuellar, and Oscar Mendez. Assists were credited to Oscar Mendez and Giovanni Jimenez.

With the score at 1-0 in favor of King City a Mustang defender hit the ball into his own net resulting in an auto goal for the Bruins. In the JV contest Juan Rosas kicked in a penalty kick as the Greenfield beat King City by a 1-0 score.

At Soledad the Aztecs received two goals by Alexis Ortiz and one goal by Marco Ceja. Earning assists for Soledad were Jose Andres, Ruben Esqueda, and Alexis Sanchez. Rigo Manzo scored a late goal for Gonzales off an assist by Alex Ramirez. Soledad improved to 6-1-1 and 1-0 in league and Gonzales is 3-4 overall and 0-1 in league. Gonzales forfeited the JV game to Soledad as they were unable to field a complete team as many players were still on winter break.

In games this week Soledad played yesterday at Greenfield and will host the Carmel Padres tomorrow evening. Gonzales played at Carmel yesterday and will not play again until a Jan. 16 game in Pebble Beach against the Robert Louis Stevenson Pirates.

The Greenfield Lady Bruin soccer team opened league by defeated the host King City Lady Mustangs by a 2-1 score. Katie Martinez and Abigail Rebollado scored goals for Greenfield and Julia Carrasco was credited with an assist for the Bruins who improved to 4-1 overall and 1-0 in league. King City is 1-4-1 overall and 0-1 in the MTAL.

The defending league champion Soledad Aztecs opened the MTAL with a 0-0 tie with Pacific Collegiate. Soledad 0-5-1 and 0-0-1 in league continues league play tomorrow at Carmel

The Gonzales High girls soccer team begins play in a new league tomorrow as the Spartans are playing in the MTAL Coastal League. Gonzales (1-4) plays in Watsonville tomorrow against Ceiba College Prep and will host Trinity Christian on Friday at Dick Force Stadium in Gonzales.