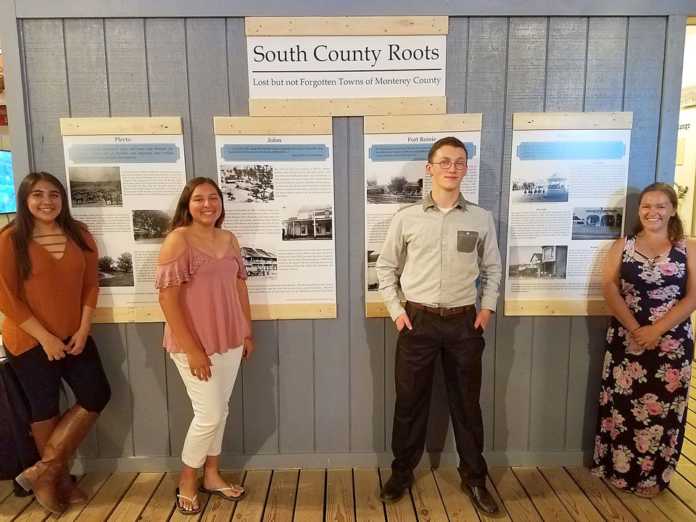 Local students Cassidy Flores, Caroline Martinez, Trinidad Berenice Morales-Garza and Carson Roylance researched and created panels about Pleyto, Jolon, Fort Romie, Bradley, San Ardo and San Lucas. They each spoke at a gathering of about 35 guests for a June 28 opening presentation, and their work will remain on display until next summer.

The MCARLM high school internship program began in June 2016, with the purpose of providing growth opportunities and work experience to high school students. With the paid internship program, students work as tour guides at the museum, conduct research and put together professional reports and exhibits.

“The goal was to help students come out with things they can put on their resume for college, as working at a museum as an intern is a good college application-builder,” said MCARLM Executive Director Jessica Potts.

“Once they get out of college, they have some life on-the-job skills they’ve learned, which will help them out in the long run as well.”

“Before this internship, I would never be able to go up to strangers, ignite a conversation and public speaking was always a no way for me,” said Morales-Garza of her personal growth while in the program.

The reasoning behind creating an opportunity for local youth came when MCARLM leadership examined the situation of current students.

“A lot of kids are coming out of college unemployable. They’re not coming out with skills they need,” Potts said. “It’s a scary thing for them. They go through all these years of college, and then the market’s flush and they have no experience.”

The internship program is a way for the county museum to give students a leg up in their future.

“It was the kind of thing that was going to help me step out of my comfort zone before I move on to college,” said Flores of why she chose to apply in her final report.

One misconception Potts noted was, “Kids think you have to like history to do this.” She explained while the internships are academic, the focus is more on skills and personal growth.

“Both Cassidy and Caroline want to be teachers, and they got a lot out of this in that sense because they had to talk with kids and had to deal with disorderly kids who came in,” Potts said.

“If I were to end up writing about something professionally, I now know what style and mindset work for me to produce something readable,” said Roylance in his final reflection report.

The exhibit project was a months-long process that began with a field trip to the Monterey Airport’s historical exhibit area and the Cooper-Molera Museum adobe, where the four students learned the behind-the-scenes process of exhibit creation. After that, the students researched, wrote, rewrote, edited and prepared the final visuals.

“The work I put into the exhibit is something I am beyond proud of because it was challenging at times, but seeing people read my panel and enjoy the information on it, is such a rewarding feeling,” said Martinez in her reflection report.

Plans are rolling for the third year of museum interns, with a potential artifact elements added to the future exhibits, as well as changes on the roster after three of the interns graduated this past school year.

Morales-Garza is heading to University of California Davis, Flores is attending Monterey Peninsula College and Martinez is going to Hartnell. Roylance, who was a junior last year, will return as the senior intern.

Two more interns have been hired, Isabella Apodaca and Dominic Conricode, and a fourth spot is open to applicants who contact the museum inside San Lorenzo County Park in King City, at [email protected] or 831-385-8020.