Debra “Debbie” Joanne Pedrazzi of Salinas passed away Monday, January 7, 2019 at 66 years of age after a brief but courageous battle with cancer. She spent the final days of her life at home surrounded by her loving husband and children.Debbie was born July 10th, 1952 to Buster and Erelene Ferreira and grew up in Greenfield, CA. She graduated from King City High School and attended California Polytechnic State University, San Luis Obispo.

On May 11, 1974, she married her soulmate David Pedrazzi and they built their life just outside Salinas, where they spent the past 44 years together. They demonstrated an unconditional love and truly enjoyed each other’s company. They had the rare ability to maintain their amazing marriage as well as work side by side in the family businesses.

She was an integral part of the growth and success of both Pedrazzi Farms and Pedrazzi Cattle Company. They have established deep roots in the Salinas Valley and she found great happiness in having their children and grandchildren close by, where an abundance of memorable family time was spent together.

Debbie had a true love of life. Some of her favorite activities included water skiing, snow skiing, traveling, renovation projects and design, spending time at the cabin on Mt. Toro, horseback riding, ranching and entering cutting horse competitions. Most recently she qualified and competed in the National Cutting Horse Association World Finals in Ft. Worth, Texas, where she won the world title in her senior division. She could fit more things into one day than most, and whatever she did was done well.

Those that knew her describe her as being beautiful both inside and out. She truly enjoyed people and most often put others needs in front of her own. She was always up for conversation and offered the best advice whenever needed. She had the ability to light up any room she walked in with her vibrant smile and outgoing personality. She was always up for an adventure and making plans for the next fun activity.

Debbie was preceded in death by her father and mother, Buster and Erelene Ferreira and brother, Terry Ferreira.

She is survived by her husband of Salinas, David Pedrazzi; her two daughters, and one son all of Salinas; Nicci (Danny) DeRoza, Nette (Braden) Hoover and Peter (Emily) Pedrazzi; her two sisters; Sandy (Monte) Larick of Chualar and Leslie (Pat) Jones of Templeton. She is also survived by her grandchildren; Caleb and Paige DeRoza, Corbin, Bryce and Avery Hoover and Daphne and Grace Pedrazzi, along with numerous nieces and nephews.

A Celebration of Life will be held Tuesday, January 22, 2019 at 11:00am at Compass Church (the red brick building) located at 830 Padre Drive in Salinas, immediately followed by a reception at the Salinas California Rodeo Grounds. 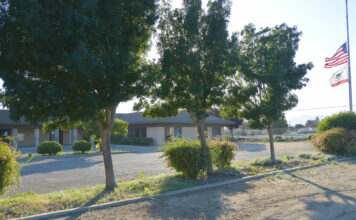