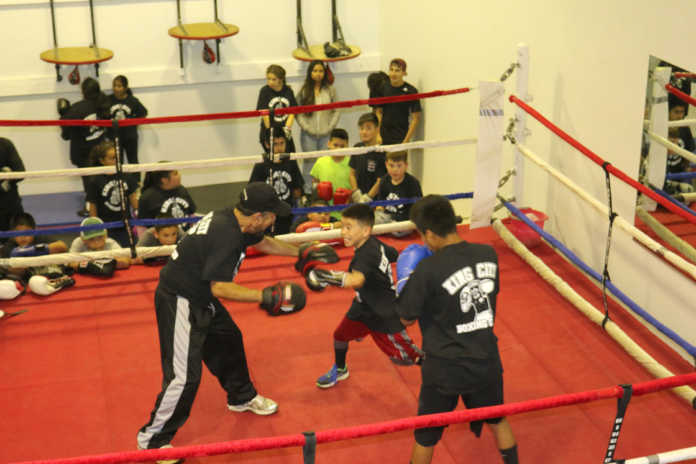 KING CITY — After months of waiting, the new King City Boxing Club opened its doors at the King City Recreation Department site at 411 Division St. Last Tuesday the club hosted a grand opening and ribbon cutting to celebrate the new boxing facility, which includes a boxing ring and training area located where a couple of racquetball courts once stood.

“We have always wanted to put King City on the map with a good boxing center,” said King City Boxing Club coach Rodolfo Tapia. “Now we have the facility to train these young boxers. Our goal was to try to do the same thing as we did when we started in San Ardo in 1998. That is to have a place where young kids can come and learn the sport of boxing, which is a positive thing, get a good workout in and then they can go home tired and avoid getting into any trouble. We want to produce the best fighters we can and travel around California and beyond to fight when they are ready. Having this gym gives us the chance to do that.”

Tapia was born into a boxing family and feels that the sport helps boxers develop in many ways.

“I was a fighter, my grandpa, my dad, I grew up with boxing,” said Tapia. “I enjoy giving back the communities where I live and work. None of this would be possible without the wonderful bosses I have in the Umbarger family. They allow me the time to train the boxers and when they are ready take them to shows to fight. We travel everywhere representing our area and have even taken boxers to other states, including Colorado and Michigan to fight. They (Umbarger family), let me do my thing in and out of the ring, and I couldn’t do it without them.”

The grand opening was well attended by young boxers, their parents, City Council members, and the King City Chamber of Commerce. The chamber sponsored the event and provided food, snacks, and beverages.

“It means a great deal to the people involved with the boxing club and here in the community to have this gym open up,” said King City Chamber of Commerce President Erin King. “It is exciting to see all the children that will receive instruction in boxing.”

King City parent Fabiola Almanza is happy that the King City Boxing Club now has a place of their own as her eight-year-old son Aiden Almanza has been boxing under the tutelage of Tapia for three years.

“Just very excited because now we don’t have to be driving to train all the way to San Ardo,” said Almanza.  “My Ivan son loves boxing and in order for him to compete he had to wait until he turned eight and then sign up with USA Boxing. Coach Tapia works hard and found him his first two fights. Ivan will now train year-round for the King City Boxing Club. It keeps him focused and disciplined and he knows he must do well in his second grade class at the King City Arts Magnet School to participate. It is the only sport he really enjoys.”

After the ribbon cutting the young boxers and Tapia entered the ring for a boxing training and exhibition for all invited guests and parents.

“I have been working and helping Coach Tapia since September when the City Council gave us the OK to turn the building into a gym,” said Keirn. “From the beginning the City of King has been supportive and I want to thank them. Thank-you to the King City Chamber of Commerce for sponsoring this event, and Steve Adams, the King City Manager for all his assistance. I especially want to thank Recreation Coordinator Andrea Wasson for all her help. It took a while to get the work done but it is finally done. I would also like to thank all the community that has donated money and Paul Tavernetti for his construction work. Lastly the biggest thank-you is to Rodolfo Tapia for all his efforts and the impact it having with the kids. We really appreciate all you do.”

“Our club is a non-profit group and all we are asking is for a monthly donation to come train,” said Tapia. “We know that for some families it is tough to pay but all we ask is for them to donate what they can. Parents can meet with me and fill out all the paperwork including a Code of Conduct for the kids and a Code of Conduct for the parents. If the kids are under 5 years old, we ask that the parents stay during practice.”