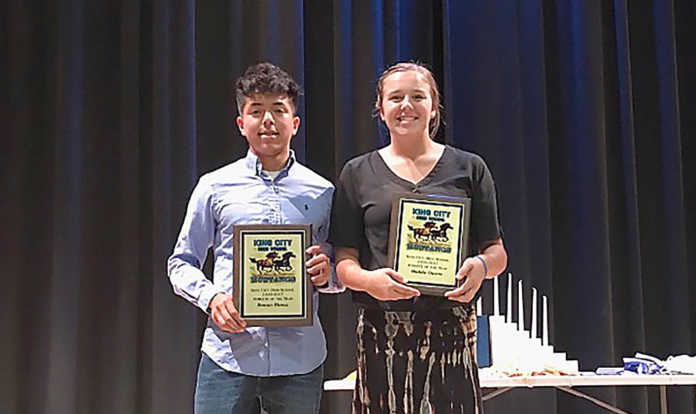 Munoz and Owens named Athletes of the Year

KING CITY — Roman Munoz, a two-sport athlete, and Madison Owens, a three-sport athlete, were chosen as the 2016-2017 Athletes of the Year for King City High School. The newly graduated student-athletes were presented plaques for their commitment to Mustang athletics on May 22 at the Robert Stanton Theatre.

“My most memorable moments from competing at King City was the first time I won the CCS championship for cross country and when our team just missed qualifying together for State,” said Munoz. “Being a three-time CCS champ in cross country means a lot and so does qualifying for State two times in track. This year I was injured for much of the track season but I was able to get back to State after I got healthy.”

Munoz ran with King City greats Edgar Bonilla and Eduardo Orozco as a underclassman and became the leader of the cross country and track and field teams after they graduated.

“It helped Roman to have Edgar and Eduardo as teammates because they pushed him to develop into a better runner,” said King City coach David Daines. “When they left for Hartnell, Roman became the guy to lead our younger runners in cross country and track. Roman led by winning individual titles in those two sports and running events for us in track when we needed important points. He is just a team-oriented athlete.”

Owens, the 17-year-old daughter of Matthew and Dawn Owens, competed for the Lady Mustang volleyball, basketball and softball teams. Owens helped King City earn two CCS playoff berths in volleyball and two playoff berths in basketball. As a senior, Owens earned a first-team All-Mission Trail Athletic League spot as a basketball player and participated in the basketball All-Star game. In volleyball this year, Owens was an All-MTAL honorable mention.

“The best highlight I had this year was beating Carmel in the playoffs this year by one point,” said Owens. “We had lost to them during the season and it was so fun to beat them in CCS in the opening round. I will miss the three sports I played at King City and had so many great times with my teammates. Now that I will be going to school at Chico I won’t be going out for sports because they are a Division II team. I still might play some intramural sports if I have the time.”

Coach Debbie Hudson praised Owens for her work ethic on the Lady Mustang teams and as a member of the volleyball travel teams.

“Maddie was a starting outside hitter and has a tremendous work ethic and the maturity to be a leader on and off the court,” said Hudson. “She was valuable both as a hitter and passer and led the team in service aces.”

Owens was a strong student at King City with a 3.77 grade point average. At Chico State, Owens will work toward an Ag. Science degree and a teaching credential.

“I enjoyed all the sports at KC High but I also liked the all the years that I showed animals at the Salinas Valley Fair,” said Owens. “I showed nine pigs and two sheep. Another thing I enjoyed doing was coaching the players in the King City Rec. program in basketball.”