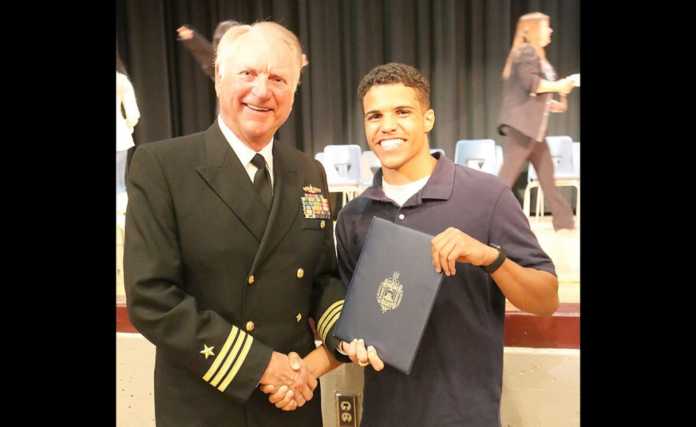 KING CITY — Soon-to-be high school graduate Christian Rose will be studying and training at the U.S. Naval Academy in Annapolis, Md., in the fall of 2018 as he prepares for his military career.

Rose, the 18-year-old son of Francis and Tamara Rose of Fort Hunter Liggett Military Base, was introduced as a future student at the Academy last Monday night at the Robert Stanton Theatre in King City at the Associated Student Body Awards Night.

Retired U.S. Commander John J. Pfeiffer attended the Awards Night and presented Rose with his appointment to the Naval Academy from Jimmy Panetta and his admission to the academy.

“I was interested in the Naval Academy because ever since I was a kid I grew up on military bases and my father served for 20 years in the Army,” said Rose. “I had a belief that it was my duty to serve, but I also wanted to pursue an education as well and to me the Naval Academy combined both options in an amazing environment. If I had not been accepted I would have most likely done NROTC at Louisiana State University, which is another officer training program. My parents were very happy with my decision.”

At the Naval Academy, Rose will attend on a full scholarship in return for five years of active military service after he graduates. Rose will be asked to spend more time on the school campus than the usual college student as, along with his studies, he will engage in the military and physical development. Rose will be able to have a Christmas break and three weeks of summer break and can earn time off (liberty). As an undergraduate, Rose will strive to graduate in four years with a Bachelor of Science degree and commissions to ensign in the Navy or as a second lieutenant in the U.S. Marine Corps. Graduates must serve at least five years in the Navy or Marine Corps. Rose plans to stay in the Navy and work toward becoming an intelligence officer.

The Naval Academy was authorized by Congress to award Bachelor of Science degrees in 1933 and provides a core curriculum along with 18 major fields of study with elective courses and advanced fields of study and research.

Rose had always been a busy student-athlete at King City High School, participating in many of the schools clubs and being a member of the Mustang football, wrestling and track and field teams. Rose plans to stay active with sports at Annapolis.

“I’ve done three sports for three years and my favorite sport is track and field,” said Rose. “I also hope to do track and field at the academy, if not it is mandatory to do an intramural, intercollegiate or club sport, so I guess I will find something. I grew up with athletes at home and my brother Dominic is the best Rose athlete because he went on to play football at San Diego State University; however, my sister Victoria is also very athletic.”

The well-rounded Rose has taken a challenging academic schedule at King City and was a member of the Culinary Appreciation Club and the Leadership and Philosophy Clubs while maintaining a 4.23 grade point average. For his efforts in the classroom Rose will be the valedictorian at the King City graduation. The past few months were demanding on Rose as he juggled his schedule with classes, sports and working for acceptance into the Naval Academy.

“It was pretty difficult to apply as I had to pass a triple certification process basically,” said Rose. “The first step was being academically up to par for their standards. The second was being physically fit. I had to pass a physical fitness exam that included pushups, pullups, running a mile. Lastly was getting a Congressional appointment, and I got one from Jimmy Panetta after interviewing in front of a panel of high-ranking officers in the military. I also got an appointment from the President as well. I also did a basic college application as well.”

Rose will be accompanied by his family to Annapolis when he is scheduled to report on June 28.