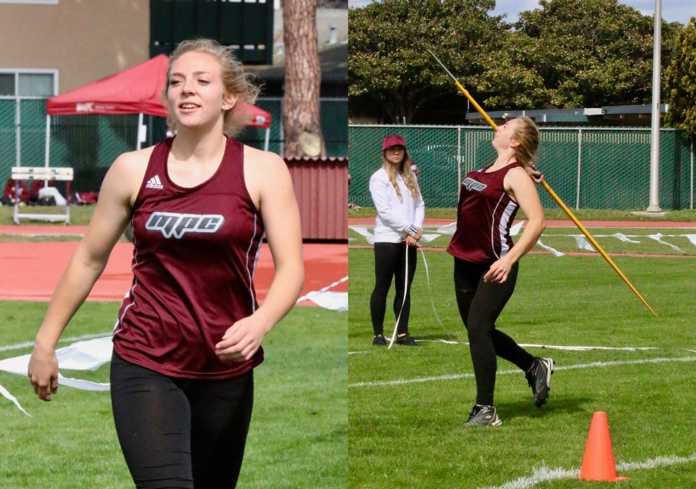 Contributed Photos
King City High alumni Natalie Robinson capped off her season of track at MPC with an eighth place finish at the state finals.

At the State Meet Robinson, the 19-year-old daughter of Kent and Donna Robinson of King City, threw her best of 108-2.

Robinson also placed sixth in the State meet in the 400 hurdles after placing second at the Northern California meet.

This season Robinson threw the javelin, shot put, and discus like she did her first season at MPC and added the heptathlon and the hurdles. The heptathlon consists of the javelin, long jump, discus, high jump, 100 hurdles, 200 run, and the 800.

As a two-year player on the Lobo volleyball team, Robinson was an outside hitter and played middle defender. As a high school athlete at King City Robinson played volleyball for four years and was a member of the track and field team for two seasons.

Robinson will attend Lewis and Clark University in the fall and will work towards a Bachelor’s degree in nursing. She will receive a track scholarship and will be a walk-on for the volleyball team.

Ordaz, a sophomore on the Panther team and a King City graduate placed first at the Coast Conference Meet and fourth at Nor Cals. Ordaz placed 11th in the State Championships in a time of 33:26.23 in the 10,000 meters.