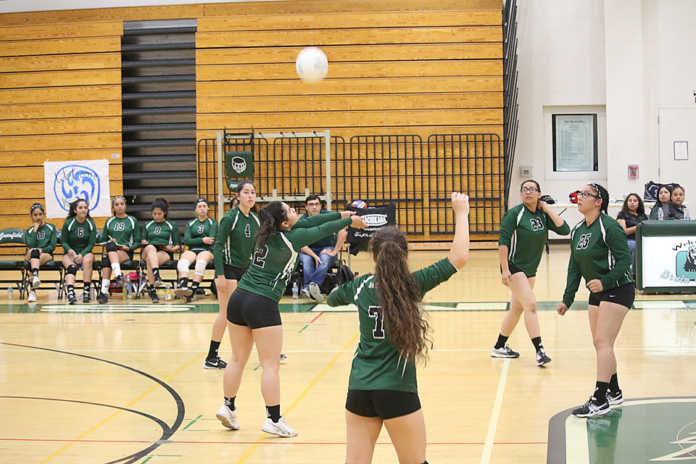 King City improves to 5-1 in league

SOUTH COUNTY — The King City Lady Mustangs are 5-1 in the Mission Trail Athletic League as they defeated the Anzar Hawks in three games in San Juan Bautista and beat visiting Soledad High in three games. On Sept. 26 the Lady Mustangs’ Sara Shepherd had 15 kills in a 25-15, 25-19, 25-18 win over Anzar.

At last Thursday’s game in King City, Shepherd led all players with 18 kills and Delaney Carroll had seven kills and five digs. Flores contributed with five kills and one block. Ana Mendez had five digs and Nancy Andrade led the team with eight blocks. Julyssa Arreola had five aces against Soledad and Kayla Silva had three aces.

The Greenfield Lady Bruins won a four-game match against Kirby last Tuesday then lost in four games two days later to the Pacific Collegiate Pumas. Angelica Cruz was applauded for serving a personal best of 12 serves in a row and had several kills against Kirby. Greenfield traveled to play Oakwood in Gilroy yesterday.

The Soledad Lady Aztecs are 3-3 in league and 5-5 over after being swept in games against Santa Catalina and King City.

“In both games my defense did a good job,” said Soledad head coach Alicia Dominguez. “They picked up hard hits. Players to be commended are: Belen Torres, Jerrianne Balino, and Arylene Nunez. Daniel Perez and Xitcialli Ramirez did a great job blocking.”

Losses against the Pacific Grove Breakers and the Carmel Padres have the Gonzales Spartan volleyball team winless in the MTAL at 0-6.

“Jazmin Useda was a force to be reckoned with at the net,” said Gonzales head coach Desiree Baltazar. “She accumulated 10 blocks and numerous touches at the net. Annabel Uribe is doing an outstanding job at adapting to the fast paced play as a libero at the varsity level.”

Gonzales will play three straight games again this week and began yesterday at home with Anzar. Tonight the Spartans will play at Pacific Grove and finish off the week tomorrow at home against the Stevenson Pirates.