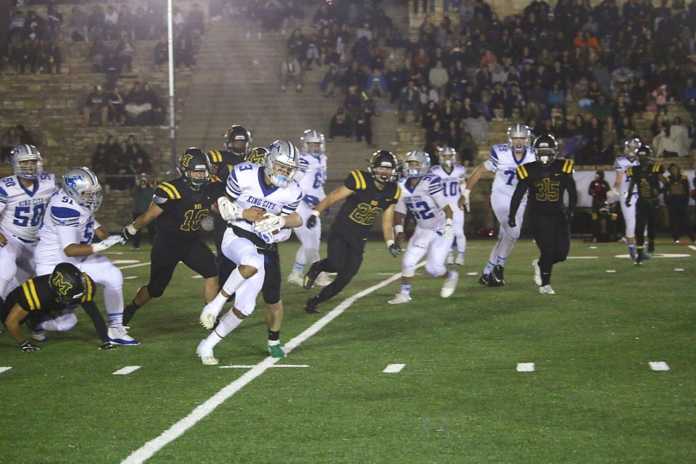 KING CITY — Opportunity and luck were not on the side of the King City Mustangs last Friday night at Monterey High School. With limited touches of the football and bad field position, the Mustangs could not keep up with the Toreadores and suffered a 38-0 shutout Cypress Divisional loss to fall to 2-1 and 3-3 overall.

“Pretty embarrassing and the worst offensive production in my career as coach,” said Mustang head coach Mac Villanueva. “We have to play better this week against Gonzales because the game is very important. First off because it is versus Gonzales for the megaphone. Second, if we win out and go 7-3 and 5-1 in league we make the playoffs with an at-large bid.”

Against the Toreadores (2-0, 5-1 overall) the Mustangs struggled with out of the gate as they had a punt blocked deep in their end zone for a touchdown to trail 7-0 with five minutes to play in first quarter. Monterey made the score 14-0 in the second quarter with a 10-yard touchdown run by halfback Tim Tyrd and the second PAT by Juan Barragan. King City could not get anything going offensively in the first half and had the football for just a few series. The Toreadores finished the first half with a 44-yard field goal to take a 17-0 led.

Monterey added a five-yard touchdown run by Byrd in the third quarter and added a rushing touchdown and 25-yard pass reception by Hendrick Lusk to complete the scoring at 38-0. The Toredores finished with 250 total yards of offense, with 161 rushing yards and 89 yards of passing by quarterback Evan Charles.

The Mustangs finished the game with just 88 yards of offense, with 43 rushing yards and 45 passing yards.

Quarterback Dylan Oliveros had an 0-6 passing night and was replaced with Jonah Mendez who finished with a two of passing performance.

Abel Quintero had 15 total yards to lead the Mustangs in rushing and Luis Briseno was the leading receiver with two receptions for 45 yards.

SALINAS — A crowd of more than 100, composed of athletes, coaches and parents from schools throughout the Salinas Valley, gathered in front of...
Read more
Local News

SALINAS VALLEY — High school fall sports in the upcoming 2020-21 school year will be delayed, with the beginning of practice pushed back to...
Read more