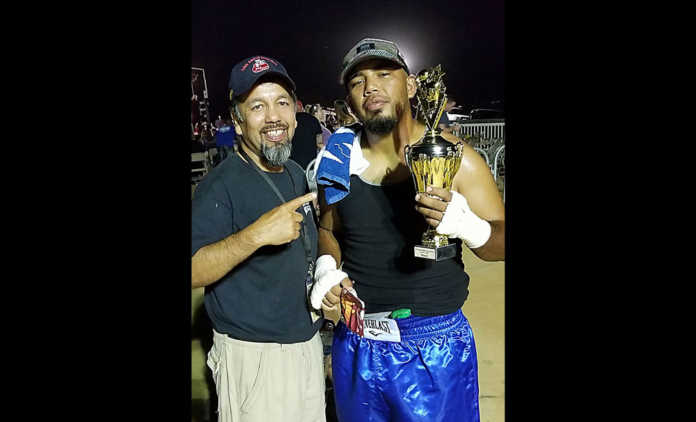 SAN ARDO — There was no rest last weekend for San Ardo and King City Boxing Club head coach Rodolfo Tapia as he traveled to a boxing match at Santa Margarita on Friday and headed north on Saturday for another boxing match in San Leandro.

Tapia took his son Alexis Tapia to the Battle of the Badges in Santa Margarita, and then drove to the East Bay to the Kendall Gym with San Ardo Boxers Andy Lopez and Alvaro Pantoja.

“I am feeling a little tired right now but I happy that my boxers fought well,” said Coach Tapia. “All three fighters took second in their matches but they felt like winners after because of the cheers and applause from the crowd. They gave great shows of their skills in the boxing ring.”

“Alexis put on a good show and fought his opponent to a draw,” said Coach Tapia. “He is 28 years old and had not fought in a while but is always in shape and trains hard when he is coaching. Andy (Lopez) and Alvaro (Pantoja) earned split decisions and did very well.”

On Aug. 26 two members of the San Ardo Boxing Club and one member of the King City Boxing Club will fight at the Lemoore Boxing Show in Lemoore.

Ivan Almanza will represent the King City Boxing Club at 98 pounds in the Lemoore Boxing Show.