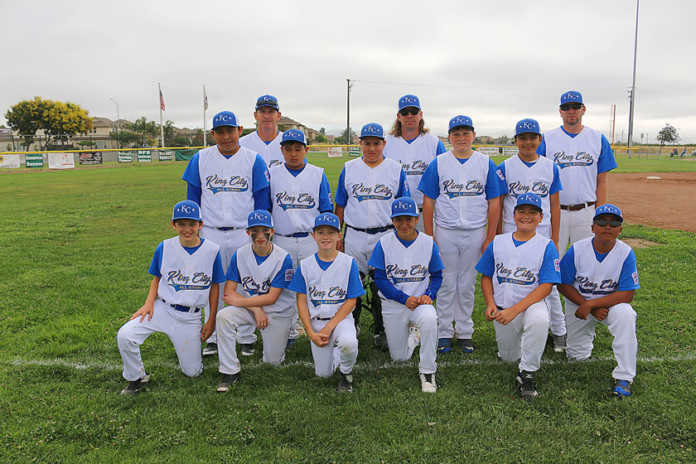 Battle of the All-Stars

SOUTH COUNTY — The Gonzales Little League 11 and 12-year-old All-Star baseball team began the All-Star Tournament last weekend with wins over King City and Ferrasci. On Saturday Gonzales beat King City 16-3 in Greenfield and followed that with a 9-3 win against Ferrasci at National Little League in Salinas.

Aaron Flores hit a grandslam and Noel Carrillo hit a homerun and was the starting and winning pitcher. Gonzales began the game with two runs in the first inning, sending six batters to the plate. Carrillo as solid on the mound and had a no-hitter going until the fourth inning and finished with eight strikeouts. King City scored two runs in the fourth inning and one run in the fifth.

King City recovered from the loss with a 13-9 win over Soledad on Sunday at Greenfield. Logan Umbarger was the winning pitcher in the back-and-forth game and received pitching help from Manuel Barcenas.

Gonzales received a good pitching outing from Jaime Arroyo in the win over Ferrasci. Fidel Gudino and Larissa Gudino hit homeruns for Gonzales. Gonzales began the game with a four-run second inning and padded the lead with two runs in the third.

“Our team has nine players that have played in four all-star tournaments together,” said Gonzales Manager Fidel Gudino Sr. “We have good pitching and hitting and I feel we can do well in the tournament.”

Soledad is 0-2 after starting the tournament with a 4-1 loss last Saturday against Continental. Greenfield Little League lost 18-1 against Hollister-National last Saturday. In games this week in the 11-12 tournament King City plays at 5:30 tonight against Manzanita at Hartnell Little League and Gonzales and Soledad face off at 5:30 in Greenfield.

In the opening games of the 7-9 age group tournament King City lost 14-4 to Hollister on Saturday in Soledad and Soledad beat Ferrasci 18-4 at King City. Greenfield was beaten 14-1 by Atlantic at King City.