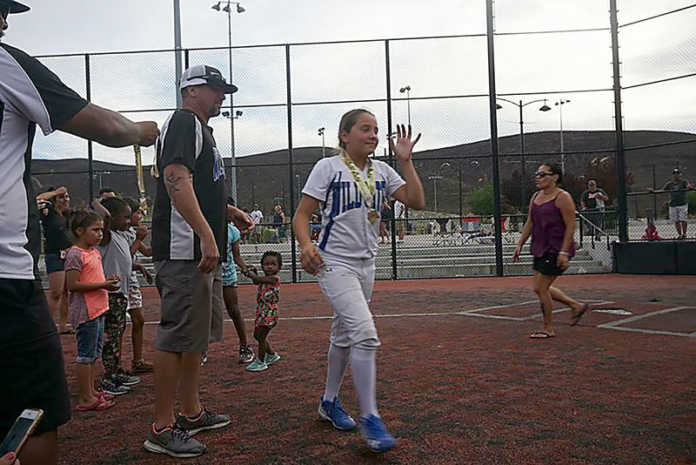 RENO, Nev. — Lisa Villanueva had an outstanding tournament as a member of the Salinas Wildcats 10-and-under softball team that won the National Softball Association (NSA) Western World Series last week in Reno, Nev. Villanueva, an outfielder and catcher for the Wildcats, is the daughter of Mac and Heidi Villanueva of King City.

“I can’t say enough about these players,” said Salinas Wildcats head coach Mike Barclay. “They hit the ball well and made just a couple of errors in the six games we played. Lisa Villanueva had a great series for us and is the only girl from South County on our team as 99 percent of the players are from Salinas.”

Villanueva finished the tournament with a 12 of 15 hitting performance with the bat, and had three homeruns, two triples and 11 runs batted in. Villanueva was credited with numerous stolen bases and runs scored and had an outfield assist.

Villanueva began the tournament last Thursday with a three-run homerun in the first game and a solo homerun. In the second game, Villanueva went 2 x 3 with two runs batted in.

The Wildcats played Sutter Butte in the championship game and won by an 11-3 score.

All the games were played at the Golden Eagle Sports Complex in Reno.

“I will be moving up with these girls to the 12 and under team,” said Coach Barclay. “We will have about eight or nine players moving up and I want to move up to coach them. If anyone wants information on our softball program they can log on to the Salinas Wildcats website.”