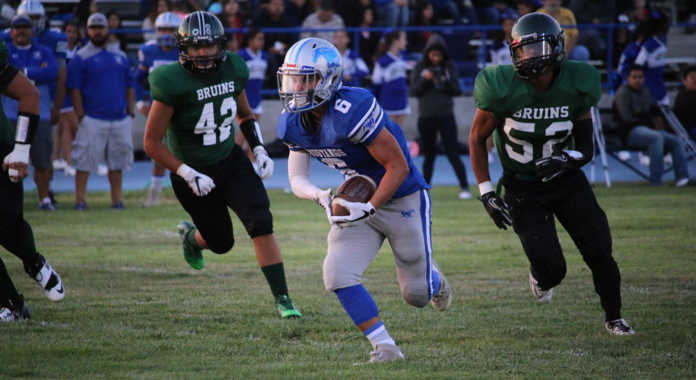 SOUTH COUNTY — The South County Jamboree proved to be a success for local high school football teams in terms of preparing for upcoming season. With King City, Soledad and Gonzales facing non-league opponents this week and Greenfield starting play next week, the jamboree served as way for teams to access their progress.

“It is always good to see what executing our schemes look like, versus an opponent, opposed to seeing it at practice,” said King City head coach Mac Villanueva. “The jamboree gave us a gauge of where we are as a team and what we need to work or improve on.”

The King City Mustangs were the host for the jamboree that was played under the lights at War Memorial Stadium last Friday night. The junior varsity teams took to the field at five pm and the varsity teams faced off at 7:30 pm.

“We use the jamboree as an evaluation for the players and the progress of the team,” said Greenfield head coach Ryan Bravo. “Nothing like seeing them in a live game setting under the Friday night lights without actually keeping score. The bonus is that everyone came out healthy.”

First-year head coach at Gonzales High Arthur Berlanga felt that his team benefitted from participating in the jamboree.

“The jamboree is a great gauge to see where we are as a team,” said Berlanga. “We benefitted from the jamboree by competing at a game pace and the atmosphere. It’s a great opportunity for our team to get those live reps against quality competition before our first game.”

“The jamboree went well,” said Frankie Berlanga. “Emanuel Ortega (running back), and our offensive line looked good putting together three rushing scores and our quarterback Robbie Santa Ana connected two times with Angel Olivas in the air. The defense put teams in some tough third down spots causing four turnovers throughout the night. I felt pretty happy about how we performed for the most part but we have plenty of areas to improve.”

Villanueva applauded many of his players for a solid outing at the jamboree on offense and defense.

“Overall I was pleased with our showing at the jamboree,” said Villanueva. “We had a couple of guys go down early on and we had some kids really step up in their place. Luis Luna did a good job of running the offense at quarterback leading to several touchdown drives. The offensive line had a solid performance. Clay Barbree was our leading receiver and was on the receiving end on a touchdown by Luna. Matt Morales, Cedrick Perez, Christian Rose, Alex Villasenor, and Shae Martin all had rushing touchdowns as running backs. On the defensive side Luis Briseno and Alex Villasenor were standouts.”

Bravo liked the Bruins confidence and energy in the jamboree setting and likes that they will have time to work on execution during the bye week.

“My staff and I were pleasantly pleased with the team’s performance at the jamboree,” said Bravo. “This being the second year with the same coaches and schemes the kids played with much more confidence and energy. We were extremely excited to see them compete and play with great effort. That being said there is a ton of room for improvement in order to have a chance to win ball games this season. We have to eliminate silly mental mistakes and foolish costly penalties. The good thing is they all can be corrected and we have time to work on them since we have a bye this week.”

Arthur Berlanga saw many good things on the field from the Spartans who played in “old school” jerseys at King City.

“I felt we played very hard and did a lot of good things that confirmed we are heading in the right direction,” said Berlanga. “We made some big plays and gave some up. My standouts on offense were Payton Flores, Damian Acosta, Giovanni Garcia, and Raul Morales. Seth Mays and Leo Ruiz stood out on defense.”

“Everyone got to play and the team had a lot of fun,” said Gildersleeve. “This was the best JV showing in several years at the jamboree. The standouts on offense were quarterback Daniel Morales, running back Sebastian Meza, and flyback JD Lopez. Defensively Fernando Garcia, Miguel Gonzales, and Leo Hernandez played well. We felt that all the teams were very competitive on Friday and that should make for a fun season.”

Rudy Carrasco took over as head JV coach at Soledad and praised the team and his coaches for a strong overall performance.

“I was pleased with our teams overall performance,” said Carrasco. “The players put in a lot of hard work in the summer in the weight room and the practice field.

“I was also pleased with all the hard work my assistant coaches have put in. Our offense was able to move the ball, especially with our run game. Our defense was able to get some stops and also created turnovers. With some hard work I believe we can be one of the toughest defenses out there. Overall it was a good job by our players and coaches.”

“I really like the way our team competed and showed effort,” said Petrovic. They demonstrated composure on the sideline and on the field the ability to capitalize on turnovers.”