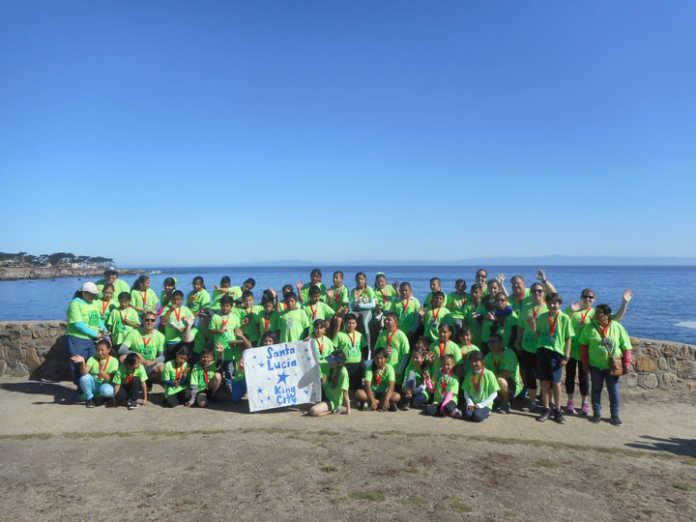 Santa Lucia Elementary participates in By the Bay 3K

This event is part of the nonprofit Just Run Program and is sponsored by the Big Sur Marathon. This was the second year in a row that Santa Lucia joined this event.

Everyone wore lime-colored shirts with an illustration of a squid doing the squid shuffle. All runners and walkers received a shirt, a numbered bib, and at the end of the 3K, a medal with a bright red ribbon was given out. Snacks of popcorn, water and protein bars were given at the end of the run.

Santa Lucia was in wave number five out of six waves, as there were 5,000 runners.

Around 100 people from Santa Lucia ran in the By the Bay 3K. Students left Santa Lucia at 6:30 a.m. riding aboard a bus and made it to the event on time at 8 a.m.

While runners ran, there were whales seen from the ocean and people dressed up as healthy fruits and vegetables cheering the runners. Most of Santa Lucia students are in the Just Run Program, which is led by Susan Love, Mike Dove and their talented crew.

Some student comments were:

“I loved the By the Bay 3K because we saw water coming out of a whale’s spout,” exclaimed fourth-grader Jesus Rodriguez.

Fourth-grader Robin stated that it was an “awesome experience,” while fifth-grader Emilyn Guzman liked “the 3K because it wasn’t a race.”

Fourth-grader Yesenia Rodriguez enjoyed “when people were cheering me up, that really made me happy and brightened my day.”

Fourth-grader Elena Ramirez declared, “The 3K was fun, but the sea and the rocks were so big, like I wanted to run and climb them.”

“When I was in the 3K I was excited because it was the first time I was in a place where I have to run with a lot of people,” shouted fourth-grader Carolina Lira.

“I was running with my dad and my little brother. I recommend you go to the By the Bay 3K next year,” said fourth-grader Stephanie Barron Alcala.

Sixth-grader George Roberts stated, “The By the Bay 3K was a great educational experience for the kids to participate in as they were able to go beyond the city limits of King City and see other parts of the county and see the big blue ocean.”

Fifth-grader Zammy Fletes commented, “I thought the run was fun and very relaxing because all of us got to run next to the bay.”

Several staff members are veteran runners who have ran in 5Ks,10Ks and beyond.

Third-grade teachers Karrie Serpa and Elizabeth Viggianelli recently ran a half marathon in Scotland and were able to give valuable advice to the runners.