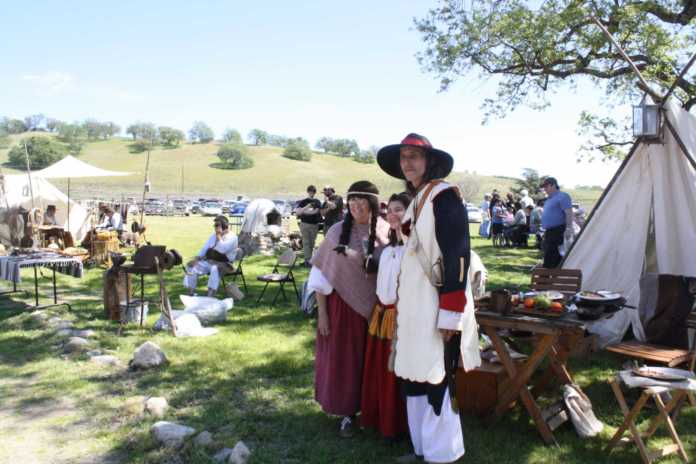 The Salinan Tribe traces its heritage back to 13 family groups that were from the mission times. The Tribe also has a petition in for federal recognition from the State of California.

The Tribal Office is located in Atascadero and the Salinan people received a grant to redo the Mission Cemetery wall. In mission times of 1769 to 1833, the Salinan people used clapper sticks, kelp rattles, animal skins for clothing, tulley skirts, flowers including lilac as soap and lavender and rosemary for purification.

“They were the first people in this area and helped to build this Mission, San Miguel Mission and Soledad Mission,”

said Susanne Latta, an elder of the Salinan people. “All our ancestry goes back to that. We like to keep the culture and the heritage especially for the young people to know where they came from.”

The Salinan people of San Luis Obispo and Monterey counties utilized the Mission Days event to work on a wall that surrounds the cemetery. According to Frederick Segobia of the Salinan Tribal Council, the wall recognizes 3,000 ancestors along with some military members who were buried inside the wall grounds.

A group of Salinan Tribe volunteers worked on the wall, smoothing the top and filling the gopher holes. The wall was originally taller than it is now, three to four feet tall, and the tribe members are trying to maintain the current height.

Sherry Jackson, a first-time visitor of Mission Days, came to the event because she has two friends who are Salinan Tribe members who are cousins. The cousins had not seen each other in a long time and Jackson was trying to reunite them.

“It’s very interesting,” Jackson said. “I like the history of areas that I move to.”

Jackson now resides in the Heritage Ranch area but previously lived in Monterey.

Jose Marquez came to Mission Days with his wife and two sons because when he was serving in the military he would come to Fort Hunter Liggett and see the Mission.

“I found this little hidden treasure,” Marquez said. “It’s isolated, peaceful and it takes you back in time.”

events and came across the Mission Days event. They decided to bring their two sons, Saul and Ismael, with them for a family field trip from Fresno.

Window on the World Column | Loving Our Vandura