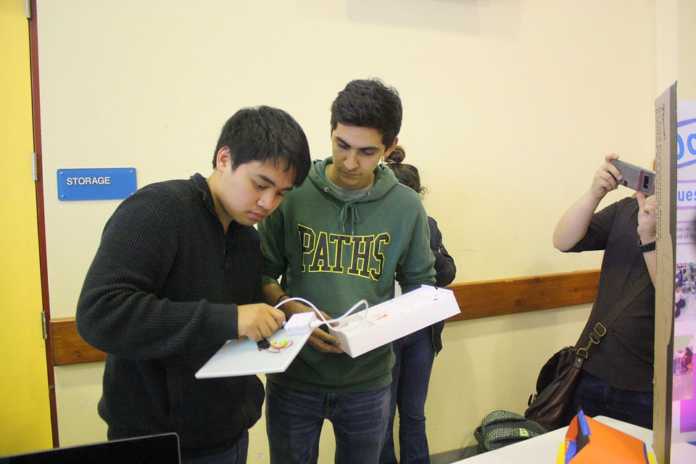 SOUTH COUNTY — Students from throughout Soledad, Gonzales, Greenfield and King City arrived at the Soledad High School multipurpose room March 21 to showcase what they learned in science class and present their science projects during the Science Maker Faire.

Fourth graders Janessa Vaca and Akilah Deshazo of Rose Ferrero Elementary in Soledad completed a zip-line project, in which the two tried to get the zip line to go further and figured out that the higher the zip line is the faster and further it will go. Vaca and Deshazo based their project on the book “My Grandma’s a Ninja.”

“It was mostly to work on a design for new airbags,” Rodriguez said. “We got the opportunity to mix calcium, baking soda, salt and vinegar to see if it would inflate fast enough.”

Fifth-grade students from Cesar Chavez Elementary in Greenfield, Isaiah Artiaga, Bella Grimm and Alyssa Pequena, based their project on “Lucy and the Rocket Dog” and made rockets.

“The book is about a dog that went into space and came back a month,” Pequena said. “The Russians wanted to used a dog instead of a human.”

Gonzales High School students Joevanny Guillen and Roy Morla worked on robotics and computer science principles. Over the past year Guillen and Morla have been working on making and programming robots.

“MESA gave us all these parts that we could mess around with and a Lego-building kit,” said Morla. “They told us to build whatever we wanted and we chose robots.”

Gonzales students were also asked to help out the National Oceanic and Atmospheric Administration (NOAA). Sophomores Lola Mendoza, Veronica Rodriguez and Maria Lopez created a weather station that measured temperature and humidity in the air.

“We also have soil probes that measure how much moisture is inside the soil,” Rodriguez said. “These are more helpful for farmers and weather people.”

The data the students gather is sent to NOAA to gain more accurate information for Monterey County.

“Right now we are focusing more on this weather project, but we are also into raising awareness to younger generations so that we can do something about the environment,” Mendoza said.

In King City, sixth-grade science teacher Pat Judd taught her students about the story “Rocket Boys,” which follows the story of Homer Hickam Jr. “Rocket Boys” is the memoir of Hickam and was adapted into the movie “October Sky.”

“The kids learned a little bit about what Sputnik and then they went into learning about Newton’s three laws of motion,” Judd said. “That dictates everything they are going to work on when they build their water bottle rockets.”

She said her students conducted research into the project, made slide shows and then researched how they were going to build their rocket.