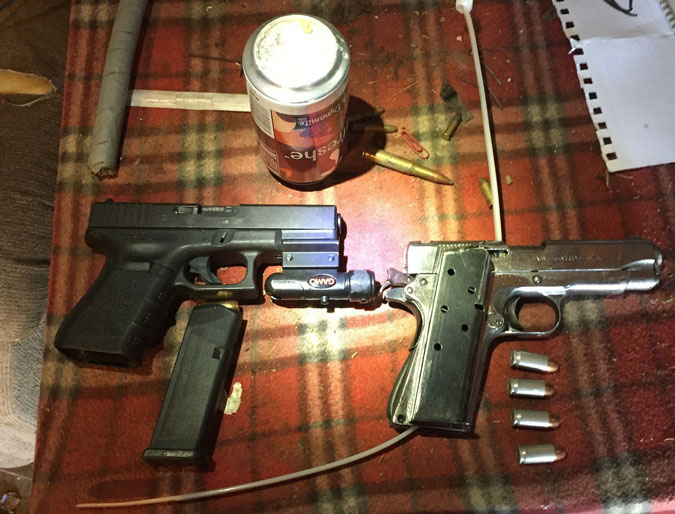 KING CITY — A month-long Monterey County Sheriff’s Office investigation ended Wednesday with the arrests of three Pine Canyon residents for multiple charges related to the possession of firearms and drugs as well as child endangerment.

During a traffic stop June 21 in the Pine Canyon area of rural King City, Sheriff’s Office detectives found methamphetamine and a loaded .40-caliber semi-automatic handgun, which was later determined to be stolen, inside the vehicle occupied by Norteno gang members Andrew Gregory and Julio Meraz.

Gregory, 28, and Meraz, 31, were arrested on warrants, gun, drug and probation violation charges.

Following this incident, the Sheriff’s Office conducted a probation search of a related residence in the 50800 block of Pine Canyon Road, resulting in the confiscation of another loaded .45-caliber semi-automatic handgun and thousands of rounds of ammunition. The serial number to the handgun had been “obliterated,” police said.

Methamphetamine and marijuana were also found throughout the residence.

All the confiscated items were within reach of an infant and an 8-year-old child living at the location. Child Protective Services was called and took custody of the children.

Police arrested the home’s occupant, Michelle Irvine, 43, on drug, firearm probation and child endangerment charges. According to the Sheriff’s Office, all the suspects living at the residence are prior convicted felons.