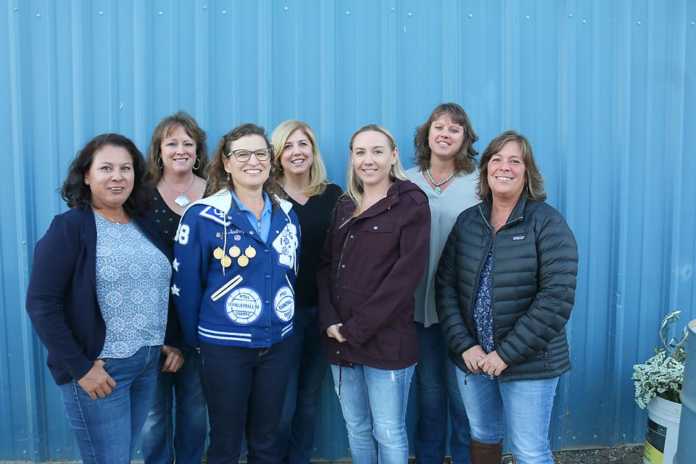 KING CITY — A standout volleyball player and one of the best King City girls basketball teams ever were enshrined last Friday at the King City High School Athletic Hall of Fame.

Trisha Frudden and the 1986-87 girls basketball team were recognized with a dinner hosted by the Mustang Bench as well as during last Friday’s halftime of the Mustangs football game against the Santa Cruz Cardinals.

In her next three years of volleyball, Frudden was unstoppable at the net as her powerful serves lead to many aces and return errors.

Frudden was All-MTAL her sophomore, junior and senior years and was chosen as the league Most Valuable Player even though the Lady Mustangs were not league champions. Both the Monterey Herald and the Salinas Californian chose Frudden to their All-County teams during those years.

In track and field, Frudden was all-league in her last three years, winning at least one event in the MTAL championship meet. Always at her best at invitational meets, Frudden was the King City high-point athlete during her junior and senior seasons. During her senior year, Frudden set three school records that rank as number one at the top of the record board with 12.38 in the 100 meters, 25.81 in the 200 meters and 10’3 in the pole vault.

Frudden continued her track career at Sacramento State University in the heptathlon but transferred to American River College to play volleyball. At American River, Frudden was All-Northern California in her first year and JC All-American in her second year and helped her team finish sixth in the state playoffs. The volleyball standout turned down offers to return to SAC State and finished her nursing degree and a master’s program. She is currently working as an RN in the emergency room at the State Prison in Sacramento, where she lives with her husband Shaun Wahley.

This year’s selection to the King City Hall of Fame team category is the 1986-87 girls basketball team, one of the most dominating teams in school history. The team had a 24-2 overall record that is the second best in school history. The majority of the players were undefeated in the seventh-, eighth- and ninth-grade years with a 66-11 overall record and 35-1 while on the varsity.