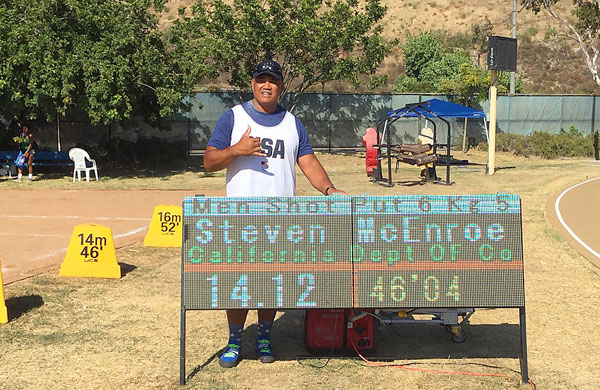 SOUTH COUNTY — Steve McEnroe brought back two gold medals after placing first in the shot put and discus at the World Police and Fire Games last week in Los Angeles. The King City resident and throwing coach at King City High School set a record in the shot put event, throwing his implement 14.12 meters (46’06) on Thursday.

“The old record was set in 2009 at 42’07 and I had a little more distance to make it a little harder to break for the next person,” said McEnroe. “This is the first time that ever competing in a throwing competition when there were throwers from all over the world. I enjoy meeting new guys at the meets and making new friends. I met some guys that had taken time off from competing after college and now they are back to competing. I didn’t know some of the guys that threw here in the United State like Don Bailey of Michigan and Dan Lister of who grew up in Watsonville. Now I know that they are great guys and great throwers. I was able to win the shot on my fifth throw.”

“That throw was good enough to win, but about seven feet of the record,” McEnroe said. “Last year at the US Police and Fire Games I threw 46.60, which is 152 feet and 10 inches. I just wasn’t feeling it this year. I still have time to improve for future meets.”

Traveling to Los Angeles to offer support and cheer on McEnroe was his wife Viola and his son Stevie and daughter Kirsten.

“We stayed a few extra days to attend some other events and take in the entertainment,” McEnroe said. “At the Los Angeles Convention Center we saw some volleyball and basketball.”