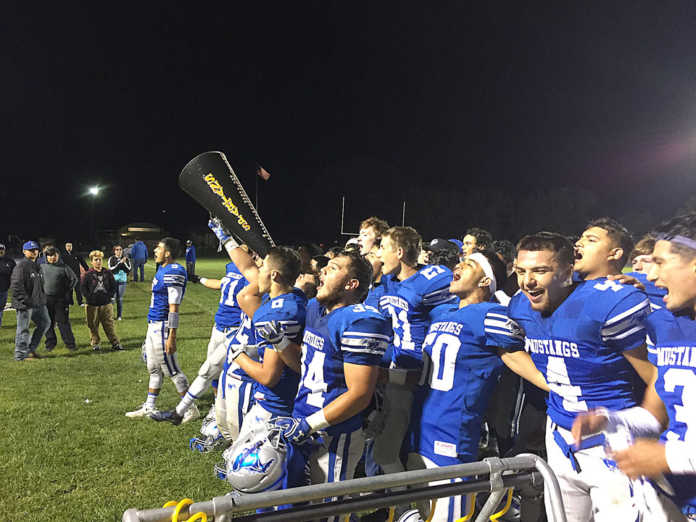 Barbree was an unstoppable force as he supplied nearly 300 total yards in the air and on the ground and Perez ran for three scored and ran for over 100 yards.

“We make a big deal about this game to our players because many of our coaches have played in the Little Big Game and it always means a lot to beat Gonzales,” said King City head coach Mac Villanueva. “Clay Barbree was like a man amongst boys on the field for us and contributed as a receiver, as a runner, and on defense. Cedric Perez got us going early with his running plays and could have scored again except for penalty call. Defensively we did a good job against Gonzales and did not give up big plays.”

Gonzales head coach Arthur Berlanga attributed his teams problems in hanging onto the football on offense and in the defensive backfield as a key factor in the game.

“There were five passes thrown our way where we should have easily come up with interceptions,” said Coach Berlanga. “A pick or two would have had us in position to score on a short field and give us a chance to change the outcome of the game. Offensively we threw the ball a lot but our receivers did no come up with receptions when they had the opportunity. There were just too many dropped passes and that hurt us. It was still just a two-score lead for them when we scored in the fourth quarter with lots of time left. That last score by Barbree really put the game out of reach.”

Perez led the way in the first quarter for the Mustangs as he scored on runs of 16 and 10 yards as King City took a 13-0 lead. Mustang place kicker Max Pallas was successful on his first PAT but missed on the second attempt. Gonzales cut the lead to 13-6 early in the second quarter with a 23-yard touchdown run by Seth Mays. The Spartans missed on the PAT.

The Mustangs completed the first half scoring with a 54-yard pass play for a touchdown from quarterback Luis Luna to Barbree and a PAT by Pallas to push the King City advantage to 20-6.

Perez scored his third touchdown of the game in the third quarter on a four-yard run. The Mustangs extended the lead to 26-12 on the touchdown and the PAT by Pallas. Gonzales mounted a drive to start the fourth quarter and reached the red zone with a pass on third down from Spartan quarterback Raul Morales to Giovanny Garcia. Gonzales went to the air on a pair of plays for a first down and then Morales threw a 10-yard touchdown pass to Garcia. A missed PAT made the score 26-12 with plenty of time on the clock.

King City had one more good drive left in them and completed their scoring on a 15-yard pass play from Luna to Barbree. The third PAT by Pallas gave the Mustangs a three-score lead. At the end of the good sportsmanship was on display as the teams shook hands on a well-played game. The Mustang seniors then ran to pick up the megaphone and headed to the home side to lead the team in a rendition of All Hail to KC High. The Spartans then marched to their side of the field to sing Big G to their fans.

“It was an important game for us,” said Barbree. “We always want to win this game because it makes our school and town proud.”

Morales passed for 140 yards on a with nine completions on 28 attempts, Garcia led the Spartans with five receptions for 87 yards, and Payton Flores caught three passes for 36 yards. Seth Mays led Gonzales with 101 rushing yards on 13 carries and scored one touchdown and Flores rushed for 58 yards on 10 carries.

King City (1-2) will begin league play in the Mission Trail Athletic League Mission Division on Friday when they host the Robert Louis Stevenson Pirates, and Gonzales (0-4) hope to get into the win column in the MTAL Coastal Division against the host Soquel Knights on Friday.

In Friday’s JV contest the Spartans proved they were a team that does not give up as they came back from a 19-13 deficit to beat the King City Broncos.

“In the second half we made changes to our back field with Michael Madera moving to slot and running back,” said Gonzales head jv coach Ruben Alvarado. “Joel Valdez moved to quarterback and Madera and Jason Flores gained yardage on every play. The line started to believe in each other and opened up some lanes. The King City offense did not get passed the 50 yard line in the second half. It was awesome to get the win against our long-time rival.”

Bronco head coach Evan Petrovic applauded the Spartans in their effort against his team.

“Hats off to the Gonzales boys,” said Petrovic. “They played with great effort and willingness to compete. We need to learn how to finish in all aspects of the practice and games.”