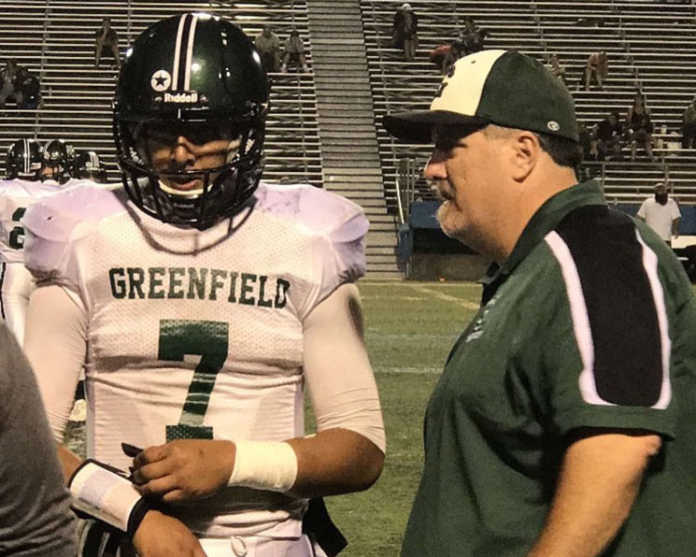 APTOS — An early miscue for a touchdown was quickly forgotten on Saturday as the Greenfield High Bruins outscored the Pajaro Valley Grizzlies 48-0 the rest of the way in a 48-6 season-opener at Cabrillo College in Aptos. The Bruins finished the game with seven touchdowns and had two running backs gain over 100 yards.

“We turned the ball over on a bad snap and gave Pajaro Valley a short field to work with and they ended up scoring to take the lead,” said Greenfield head coach Ryan Bravo. “I want to praise my coaching staff and the players for coming through with a strong showing. This is the second year that our staff has been together now with the same schemes and it just works better now.”

Calvin Lopez tied the game at 6-6 on a 12-yard touchdown run for Greenfield and William Enriquez broke the tie with a successful point after attempt the put the Bruins up for good at 7-6.

A touchdown with no time left on the clock cost the Greenfield JV out of a chance of coming home with a tie in the first game on Saturday at Cabrillo. The Grizzlies were given chance from the 10-yard and score the winner on the last play.

“Pajaro Valley was driving with seconds to go and on pass play we knocked their receiver out of bounds and we were sure that time had run out,” said Greenfield JV head coach Bill Riddell. “The officials saw it the other way and gave them the ball at the 10 with just a second to play. Their big quarterback called his own number and took the ball in for the win. That was tough, but overall we played really well considering it was our first game. We finished the game with no turnovers and just a few penalties so we were happy with that.”

It was a back and forth game as the Bruins led 16-6 and watched the Grizzles storm back to tie the game at 22-22. Quarterback Daniel Morales scored one rushing touchdown and threw a 15-yard touchdown pass to Jess Martinez.

Offensively Riddell praised the play of JD Lopez and Sebastian Meza at running back and Jesse Martinez at flyback. Leading the Greenfield offensive line were Chris Rosas and Ivan Aguilar at tackle and defensive standouts were Sergio Aguirre and Brian Pina of the defensive line, Anthony Chiquito at linebacker, and Ivan Solano at outside linebacker.

The Bruins (1-0) will host their first home game on Friday against the Watsonville Wildcatz. Watsonville is 2-0 in non-league play with wins over Pacific Grove and Santa Cruz. Greenfield will host the Soledad Aztecs on Sept. 15 before starting league play at Harbor High on Sept. 23.