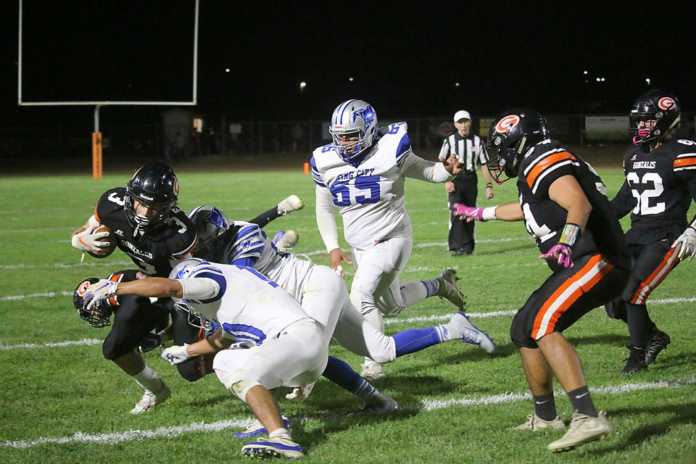 SOUTH COUNTY — A lot has changed since the last time a Gonzales High football team defeated King City. In 2003, the price of gas was $1.83 a gallon, Volkswagen built the last Beetle and Arnold Schwarzenegger was the governor of California.

On Friday night, the Spartans made their own mark on history with a decisive 33-13 victory over the King City Mustangs in front of a supportive crowd at Dick Force Stadium.

Gonzales held a 13-7 lead in the third quarter but outscored the Mustangs 20-7 on two rushing touchdowns by receiver, turned running back, Franky Cisneros and a rushing touchdown by quarterback Raul Morales to claim the win and the megaphone.

The Spartans led by the running of Payton Flores and the passing of Morales reached the red zone late in the first quarter put were pushed back after a penalty. On fourth down from the Mustang 15-yard line, Gonzales spread the field and lineman, turned eligible receiver Miguel Arreola grabbed a pass from Morales and ran into the end zone for a touchdown. Cisneros added the PAT, and the host team held a 7-0 lead with 8:33 remaining.

“It has been at least two weeks since we put that play in,” said Gonzales head coach Arthur Berlanga. “Arreola was a legal receiver from his offensive tackle spot and caught a good pass from our quarterback. Even though it was fourth down we felt King City would be keying on Payton Flores and our receivers.”

The teams traded a few possessions after the score with the Spartans trying to keep Dylan Oliveros from running wide and Alex Valdez from running for long runs up the middle. The Spartans were led defensively by linebacker Nael Vasquez and lineman Pablo Villasenor and the defensive backfield that included Payton Flores and Michael Duby. In the last five minutes of the first half, the Spartans mounted another scoring drive that ended with a four-yard touchdown run by Flores and a missed PAT by Cisneros. Gonzales took the 13-0 lead into intermission.

In the third quarter the Spartans received the opening kickoff but were trapped deep in their own end zone. Morales had success with short passes down the sideline in the first half but when he tried to hit a receiver on second down he was picked off by King City’s Valdez, who ran in for a score from 20 yards out. A PAT cut the Gonzales lead to 13-7.

With King City sending three more players to contain the shifty Flores, the game opened up for Cisneros who ended a late third quarter drive with a 10-yard touchdown run. Gonzales elected to go for a two-point conversion but fell short, and the Spartans held a 19-7 advantage.

At the 10-minute mark of the fourth quarter, the Mustangs were on the move gaining yards on runs by Dylan Oliveros and passes from quarterback Jonah Mendez to Luis Briseno. After reaching the Spartan 20-yard line, Mendez fired a pass intended for Briseno but the pass was intercepted and returned to the Gonzales 13-yard line by Flores. The ensuing Spartan drive ended with a six-yard touchdown run by Morales. Cisneros blasted the PAT and the Spartans took a 26-7 lead with 8:52 left to play.

Gonzales capped off its scoring with a 24-yard touchdown run and PAT by the multi-talented Cisneros, who finished the contest with 54 rushing yards, two touchdowns and two PATs. King City answered back with a touchdown, making the final score 33-13.

“Our defense played a good game,” said King City head coach Mac Villanueva. “They definitely had to earn every yard. They hit a trick play early on fourth down for the first touchdown. Offensively we could not sustain drives and we left our defense on the field too much. Defensively Luis Briseno had a great game, forcing a fumble and had numerous tackles. On offense Aaron Leonard ran the ball hard with limited carries. He definitely earned himself more carries as we move forward. Gonzales had a good game plan on both sides of the ball and Coach Berlanga has done a lot with the program since he has been there. They play hard but demonstrate good sportsmanship.”

Morales passed for 177 yards on 13 of 20 passing performance and threw one interception. Dominic Emery led Gonzales with seven receptions for 89 yards, Flores had three catches for 44 yards, Alex Morga had two receptions for 29 yards, and Arreola earned 15 yards on the touchdown play.

King City produced 190 yards of offense and were led in rushing by Leonard who ran for 66 yards on three carries. Alex Valdez rushed for 40 yards on 13 carries, Mendez ran for 25 yards on seven carries, and Oliveros finished with 15 yards on six carries. Mendez was nine of 21 for 31 yards passing and threw two interceptions. Valdez had two pass receptions for 13 yards, Oliveros caught four passes for nine yards, and Briseno had two receptions for eight yards.

Gonzales improved to 7-0 overall, its best start since the 1969 Mission Trail Athletic League championship team that finished 9-0. The Spartans are 3-0 in the Santa Lucia Division of the Pacific Coast Athletic League and will host Greenfield on Friday. The Bruins are 3-1 in divisional play after starting the season at 0-4.

King City fell to 3-4 overall and returns to Cypress Divisional play Friday when they host the Pacific Coast Breakers. The Mustangs are 2-1 and the Breakers are 1-3.

SALINAS — A crowd of more than 100, composed of athletes, coaches and parents from schools throughout the Salinas Valley, gathered in front of...
Read more
Local News

SALINAS VALLEY — High school fall sports in the upcoming 2020-21 school year will be delayed, with the beginning of practice pushed back to...
Read more