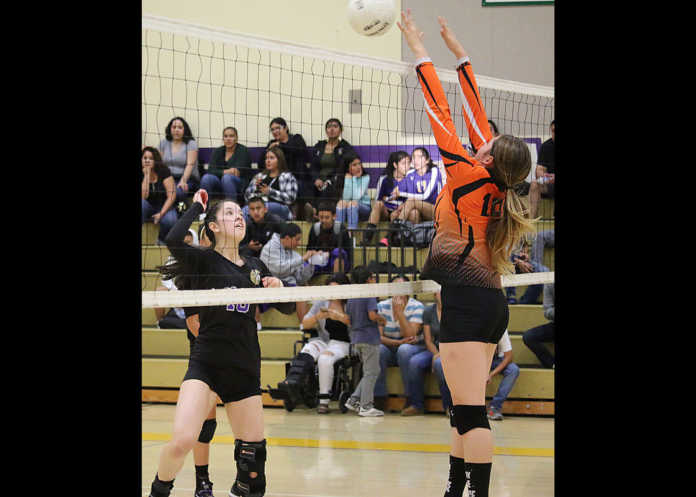 In the match with Gonzales, sophomore outside hitter Olivia Fale was a standout against the Spartans. Soledad beat Gonzales 25-14, 25-15, 25-13.

“We had a rough start and woke up half way through the first set,” said Soledad head coach Alicia Dominguez. “Once we started covering and picking up tips we didn’t let them score too much. The player who stood out was Olivia Fale with 19 kills.”

Last Thursday in Pebble Beach the Aztecs downed the Stevenson Pirates, 25-19, 25-23, and 25-16. Standouts for Soledad were Jazmin Aguilera with 13 digs and 10 kills, and Fale at outside hitter, and Danielle Perez at middle blocker.

Yesterday Soledad host the Santa Catalina Cougars and will travel to King City tomorrow for a game with the Lady Mustangs.

The King City Lady Mustang volleyball team fell to 8-1 overall and 3-1 in the Mission Trail Athletic League after a three-set match to the Santa Catalina Cougars in Monterey. On Tuesday Sept. 19, the Cougars won 13-25, 17-25, 21-25.

Grace Shepherd had 17 kills and Delaney Carroll had six kills and four blocks against Santa Catalina. Megan Flores led King City in assists with 18 and Cassidy Flores added five assists. Leaders in digs were Ana Mendez with eight and Nancy Andrade with six.

Last Thursday in King City the Lady Mustangs swept the Gonzales Spartans, 25-5, 25-11, and 25-12. Shepherd led in kills with 13, Carroll just missed double figures in kills with nine and Andrade had six kills. Teagan Soares led the team with 19 assists and five aces and Mendez and Julyssa Arreola had six digs apiece. Carroll added two blocks and Jalen Mendez had one block.

Yesterday in San Juan Bautista the Lady Mustangs played an MTAL game against the Anzar Hawks and tomorrow will host the Soledad High Aztecs.

The Greenfield Lady Bruins are 0-2 at the start of Mission Trail Athletic League Coastal Division with losses last week at home to the Marina Mariners and on the road against the York Falcons in Monterey.

“Our squad was tied with York in the third game,” said Greenfield head coach Mark Francis. “York pulled away from us to win the match after that.”

“We are struggling to find our groove,” said Gonzales head coach Desiree Baltazar. “We are giving up too many unforced errors. We know what we need to do to step up our game but it will come down to executing.”

The Spartans are 0-3 in the MTAL and 2-6 overall. Gonzales hosted the Pacific Grove Breakers yesterday and will host Santa Catalina tonight.